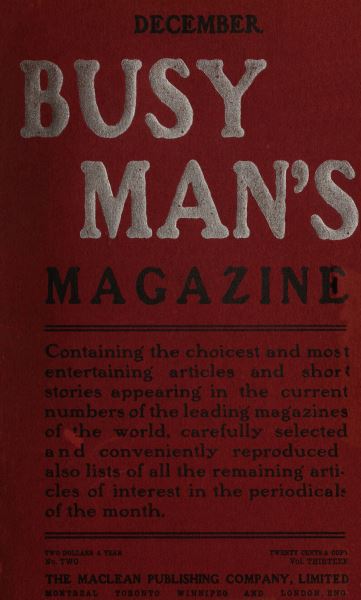 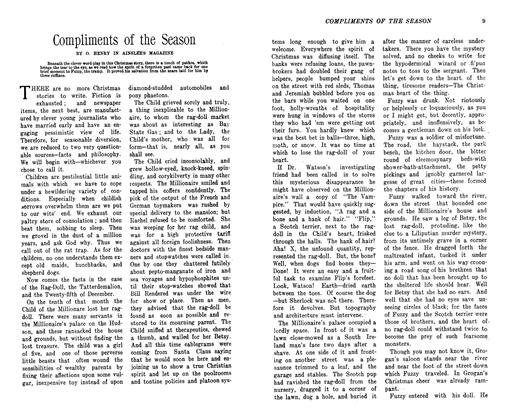 Compliments of the Season 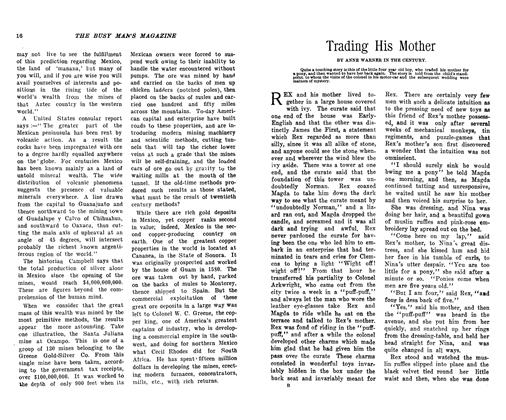 By ANNE WARNER IN THE CENTURY17 min 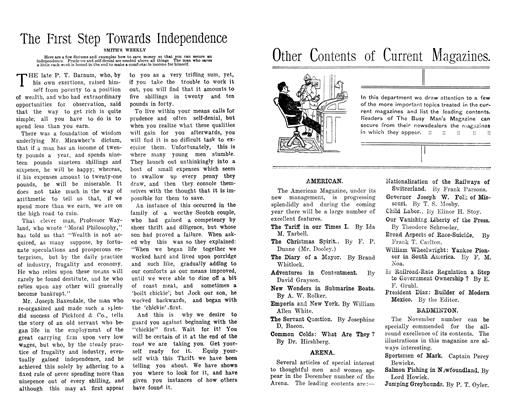 Compliments of the Season

THERE are no more Christmas stories to write. Fiction is exhausted; and newspaper items, the next best, are manufactured by clever young journalists who have married early and have an engaging pessimistic view of life. Therefore, for seasonable diversion, we are reduced to two very questionable sources—facts and philosophy.

REX and his mother lived together in a large house covered with ivy. The curate said that one end of the house was EarlyEnglish and that the other was distinctly James the First, a statement which Rex regarded as more than silly, since it was all alike of stone, and anyone could see the stone whenever and wherever the wind blew the ivy aside.

By ANNE WARNER IN THE CENTURY17 min

7677
ARTICLES FOR THE WORKERS

NEW YORK’S theatres, cafes and hotels, with many of her industries, are supported by a floating population. The provinces know this, and it pleases them mightily. But how many of the actual inhabitants of New York know of the large floating population that is associated with her magazines, newspapers, and publishing interests? By JAMES H. COLLINS IN ATLANTIC MONTHLY15 min

Five Years of the Steel Trust

THE first annual report of the United States Steel Corporation was the most remarkable financial document that had ever been known in the long history of commerce. It looked more like a magazine than an annual report, with its sixty-four pages and sixty-three illustrations of furnaces and steel mills. By HERBERT N. CASSON IN MUNSEY’S13 min

THE immense value of physical culture is to-day not disputed; its beneficial results are utilized to the full by the medical profession in the treatment of consumption, obesity, heart diesase, dyspepia, deformities, and many other departures from the healthy state. By ALEXANDER BRYCE12 min

IT was the “Smooth Stranger” who a few days ago declared that of all the cities in which he had lived and plied his calling none was such a paradise for hotel “dead, beats” as is New York. As a matter of fact, he spoke the truth, for with the thousands who come and go among the great caravansaries in the metropolis it is impossible to keep watch and ward over the honesty of every patron. By HERALD MAGAZINE11 min

LONDON’S Mansion House has never had a more generally popular occupant than Sir William Treloar, Lord Mayor-elect of London, will be. It is sometimes the case that people whose interests are not very closely identified with the City of London are obliged to admit, “We never heard of him,” when the name of the new Lord Mayor is told to them. By E. J. IN THE YOUNG MAN10 min

The Salvation of the Stage

THERE were no newspapers in Shakespeare’s time. The theatre was the newspaper of the Elizabethans. In London at the close of the sixteenth century, there lived one hundred and eighty thousand human beings, and for their use there were licensed two hundred theatres. By W. T. STEAD IN WORLD TO-DAY10 min

IN 1864 there was living at Renovo, Pennsylvania, a young man of twenty-five who had for a year been resident engineer in charge of the middle division of the Philadel phia & Erie. Now a division superintendency in the early sixties was no tremendous matter. By ARTHUR E. McFARLANE IN SYSTEM9 min
November 11906