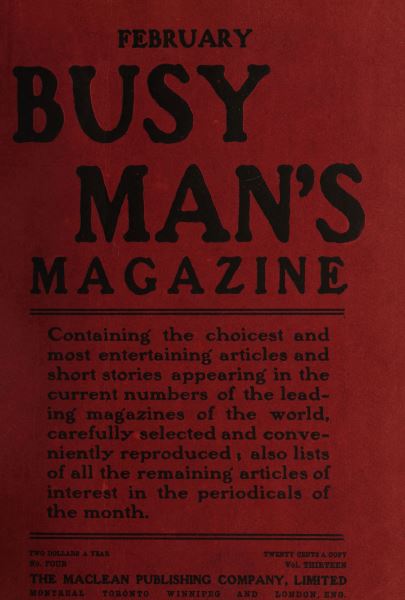 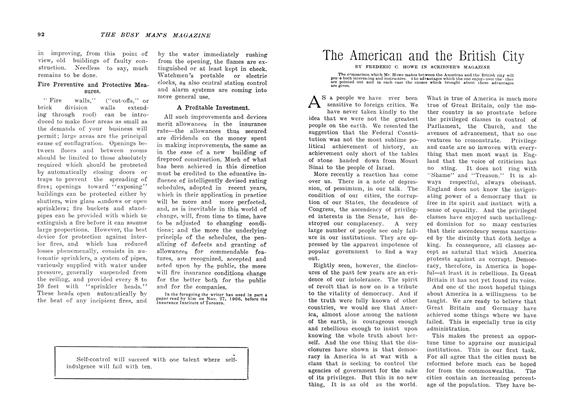 The American and the British City 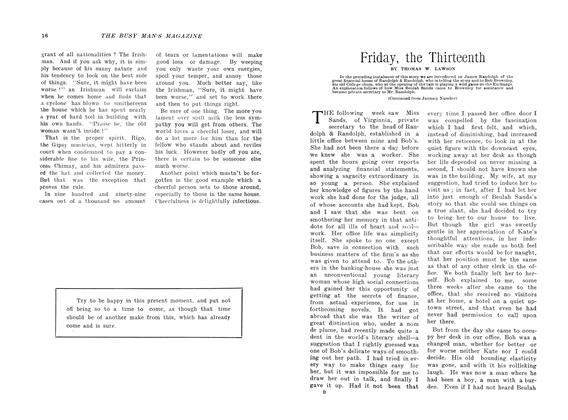 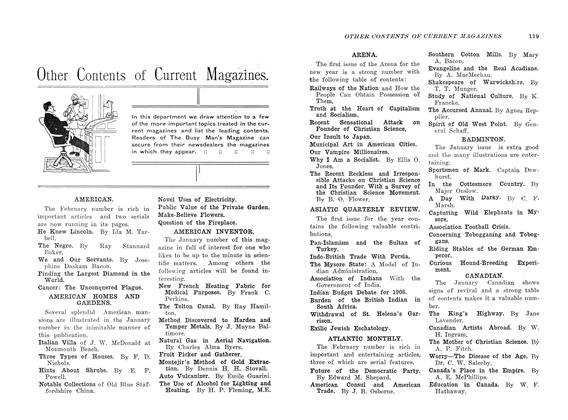 The American and the British City

AS a people we have ever been sensitive to foreign critics. We have never taken kindly to the idea that we were not the greatest people on the earth. We resented the suggestion that the Federal Constitution was not the most sublime political achievement of history, an achievement only short of the tables of stone handed down from Mount Sinai to the people of Israel.

THE following week saw Miss Sands, of Virginnia, private secretary to the head of Randolph & Randolph, established in a little office between mine and Bob’s. She had not been there a day before we knew she was a worker. She spent the hours going over reports and analyzing financial statements, showing a sagacity extraordinary in so young a person.

The February number is rich in important articles and two serials are now running in its pages. He Knew Lincoln. By Ida M. Tarbell. The Negro. By Ray Stannard Baker. We and Our Servants. By Josephine Daskam Bacon. Finding the Largest Diamond in the World.

THE Jews of New York City have recently celebrated the two hundred and fiftieth anniversary of their settlement on Manhattan Island. In many ways it was the most triumphant episode in the long and lugubrious history of their race. It marked what is unquestionably Israel’s highest stage of social, political, and industrial development. By BURTON J. HENDRICK IN McCLURES MAGAZINE13 min

The Lords as the Supreme Court of Appeal

THE House of Lords is not only a deliberative and legislative assembly. It is also the supreme Appeal Court of this realm. As such it is the ultimate resort of the suitor who thinks an injustice has been done him by a decision of any of the law courts. By MICHAEL MACDONAGH IN THE MONTHLY REVIEW12 min

The Rapid Advancement of Cortelyou

A BRAIN to organize and the grit to do it. These two qualifications explain a career which in the very focus of American careers is accepted as extraordinary. They have made a member of the President’s Cabinet and the administrative head of a great party out of a nine-hundred-dollar stenographer. By ALLAN D. ALBERT IN MUNSEY’S MAGAZINE11 min

The Incident of the Pearl Necklace

"FURN” Freeling was a man with a specialty, and had a specialist’s pride in the superiority and selectiveness of the particular line of burglarizing which he had elected to follow. In a way, he looked upon all members of his shady craft who did “general work” as blunderers, lacking the wit, the initiative, and the nice discrimination to see an original and interesting phase of work and to develop it to a high point. By FORREST CRISSEY IN AINSLEES MAGAZINE11 min

Guatemala: A Land of Opportunities

THERE is a great deal of ignorance and wrong conception concerning the little republics of Central America. Mexico has been exploited a great deal in recent years, and the location of Panama is now pretty generally known, but the five republics lying between these two countries have been too much overlooked by recent writers. By NEVIN O. WINTER IN THE WORLD TO-DAY11 min

2829
ARTICLES FOR THE WORKERS

On the Virtue of Thrift

IT IS customary in these days to laugh at Samuel Smiles and his teachings. Mr. Shorter and other critics openly deride him, and maintain that the great secret of getting on is to have good luck. . . . But still I am persuaded that moralists ought to say more than they do about the virtue of thrift and the wisdom of saving. By CLAUDIUS CLEAR IN THE BRITISH WEEKLY10 min

"IT'S a nice morning,” I said, looking over the garden wall. During June, July, August, and part of September Angus Mackenzie and his wife inhabit a small house about a mile below the lock. As he happens to have married Maisie, the second of my wife’s sisters, Mackenzie and I see a good deal of each other in the summer time. By RICHARD DARK IN THE GRAND MAGAZINE10 min
January 11907