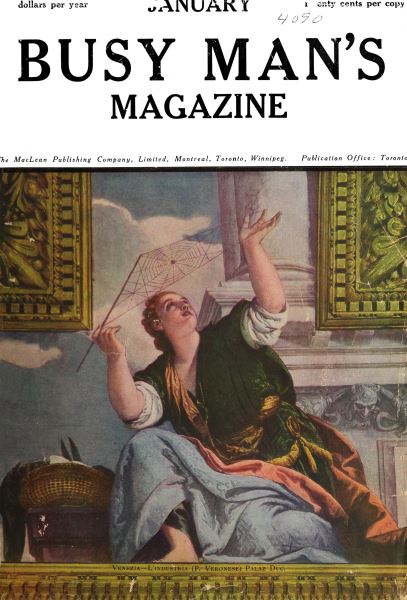 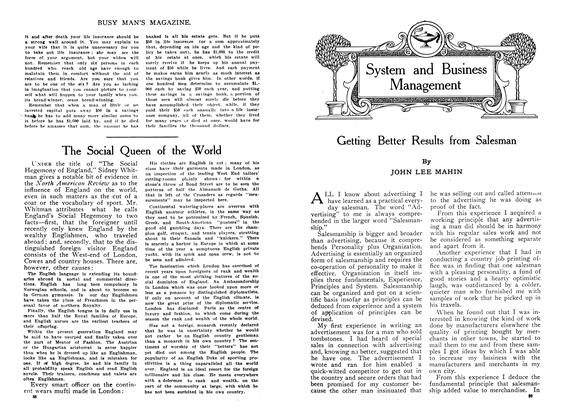 Getting Better Results from Salesman 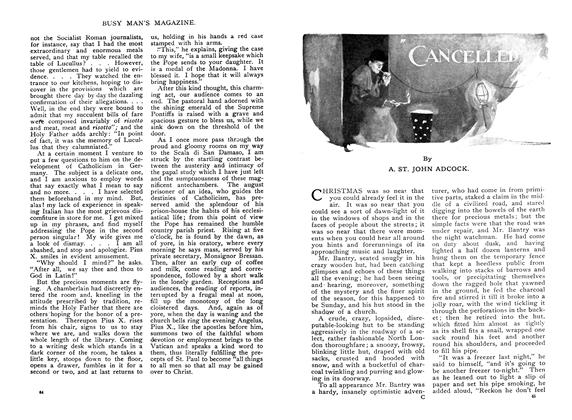 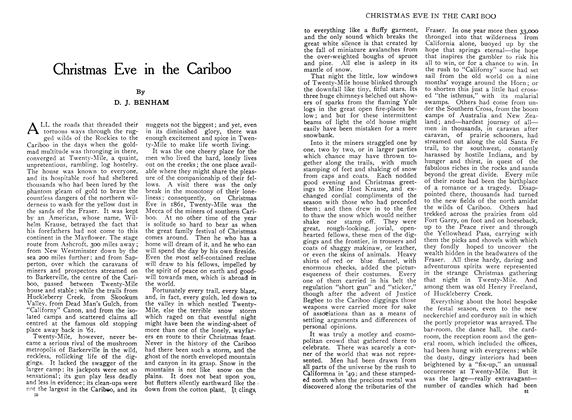 Christmas Eve in the Cariboo

Getting Better Results from Salesman

ALL I know about advertising I have learned as a practical everyday salesman. The word “Advertising” to me is always comprehended in the larger word “Salesmanship.” Salesmanship is bigger and broader than advertising, because it comprehends Personality plus Organization. By JOHN LEE MAHIN22 min

Christmas Eve in the Cariboo

ALL the roads that threaded their tortuous ways through the rugged wilds of the Rockies to the Cariboo in the days when the gold-mad multitude was thronging in there, converged at Twenty-Mile, a quaint, unpretentious, rambling, log hostelry.

"MY dear,” said motherly Mrs. Winstanley to the pretty widow, “you may take this from me—your nearest neighbor is simply a splendid pauper. Not as regards money or position, of course —everybody knows the Earl of Lindisfarne is premier Earl of England and as rich as an American railway president—but as regards love and the recognized comforts of life. By FRANK H. SHAW19 min

An Hour With the Pope

THE time is past when one might say, with a certain erstwhile ambassador of the Grand-Duchy of Tuscany: “I have achieved my greatest diplomatic success; I have succeeded in speaking with the Pope.” Vatican manners have become more democratic since those days; and, however true it may be that the august recluse who, from his seat on St. Peter's throne, guides the destinies of Catholic mankind, has retained for us his grave and mysterious attraction, it is none the less the case that the bronze gates which close the papal sanctuary to the outer world are opened more frequently than of old, not only to diplomatists and pilgrims, but also to the mere casual travelers whom a feeling of respectful curiosity brings to their threshold. By RENE LARA17 min

NO sooner does the fascination of mystery in connection with an historic mansion take possession of one, than one or two familiar houses with strange histories come to mind. Foremost of these, in the memory of most people, is, perhaps, Welbeck Abbey, the seat of the Duke of Portland in the Dukeries, with its wonderful subterranean passages and apartments, including a riding school and ball-room. By MABEL GREENWOOD16 min

The Story of Wedgwood Pottery

CLOSE to the little railway station of Etruria in Staffordshire stands the most famous pottery in the world, a quaint, rambling conglomeration of low brick buildings which— save for the inevitable touch of time, and for the addition of the museum, added some four years ago—remains just as it was built by Josiah Wedgwood in the eighteenth century. By E. M. TAIT10 min

Sharing, Benefit and Pension Plans of the International Harvester Company

IN the progress and development of American business methods there is probably no subject more worthy of attention than that of profit sharing; for profit sharing, insurance, pensions, welfare work, etc., are vital elements in the relations between capital and labor. By GEO. W. PERKINS9 min

AMONG the many attractions for the visitor and tourist at the Ontario Agricultural College, Guelph, Ontario, the famous collection of wax fruits and vegetables stands unique. It was while visiting the World’s Fair at Chicago in 1893, that Prof. H. L. Hutt first saw specimens of Mrs. Potter’s wax fruits. By U. JEAN WYNN9 min

PRE-EMINENTLY, the event of gieatest theatrical interest since my last article, was the opening of the palatial New Theatre at Sixty-Eighth Street and Central Park West, New York City. It is the only endowed theatre in America, and its career will be watched with interest throughout United States, Canada and Europe as well. By J. J. DINGWALL8 min
December 11909