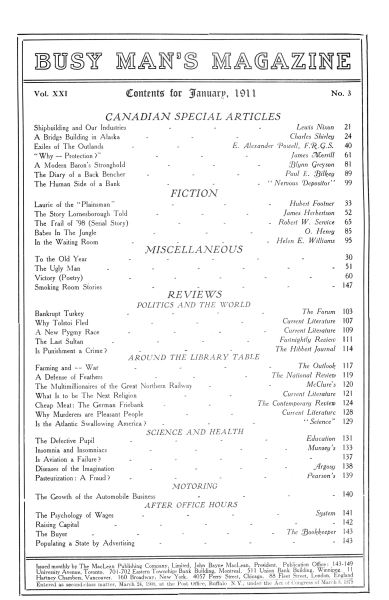 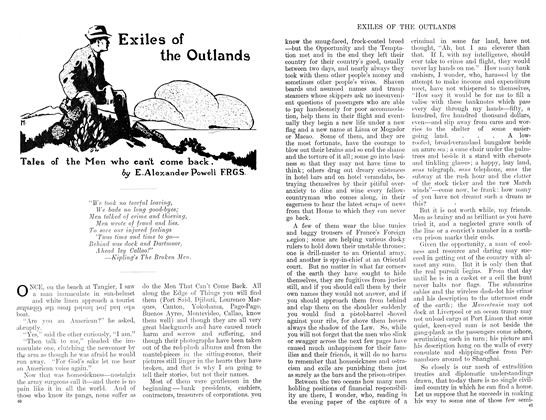 Exiles of the Outlands 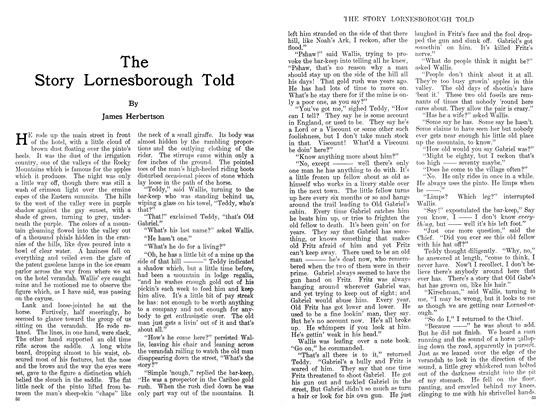 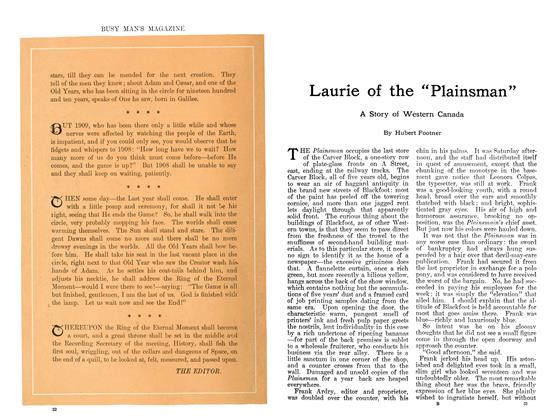 Laurie of the “Plainsman”

Exiles of the Outlands

ONCE, on the beach at Tangier, I saw a man immaculate in sun-helmet and white linen approach a tourist who had just landed from the Gibraltar boat. “Are you an American?” he asked, abruptly. “Yes,” said the other curiously, “I am.” “Then talk to me,” pleaded the immaculate one, clutching the newcomer by the arm as though he was afraid he would run away.

HE rode up the main street in front of the hotel, with a little cloud of brown dust floating over the pinto’s heels. It was the dust of the irrigation country, one of the valleys of the Rocky Mountains which is famous for the apples which it produces.

Laurie of the “Plainsman”

A Story of Western Canada

The Diary of a Back Bencher

THEY say this is to be the fighting session. I got it from one of the messengers this morning. He seems to know a lot more than I do about what’s going on. He says the session would last till midsummer or longer if it weren’t for the Imperial Conference in June. By Paul E. Bilkey17 min

The Human Side of a Bank

120121
The Best from the Current Magazines

MULTI-MILLIONAIRES OF THE GREAT NORTHERN RAILWAY.

THE three years the grasshoppers were eating up Minnesota—eighteen seventy-four and -five and -six—“Jim” Hill used to sit in front of his coal-and-wood store on the levee at St. Paul, talking about buying the St. Paul & Pacific Railroad.

A Bridge-Building in Alaska

I HAD nothing to do with the building of the bridge so I am free to speak of it. I had business in Alaska, but not in bridge-building. I happened to see it when I was there and it was worth the whole journey. The “Prince George” carried me up from Vancouver and set me down at Skagway. By Charles Shirley11 min

124125
The Best from the Current Magazines

WHAT IS TO BE THE NEXT RELIGION?

WHAT is to be the next religion, asks Current Literature? Two vivid expressions of opinion bearing on the present religious situation in England and America have aroused widespread comment. The first is an ironical arraignment by Oliver Madox Hueffer of existing tendencies, which appears in a London review under the title, “The Next Religion.”

128129
The Best from the Current Magazines

THE Freibank of a German city is a most interesting place, though few tourists visit it, and those who do seldom know much about the commodities exposed there for sale. In Berlin there are four of such buildings, all situated in the poorer quarters of the town, but as a rule one Freibank suffices for each great industrial city; whilst in Hamburg there is not one at all as yet, owing possibly to the fact that that town is so close to the ports where we send our worn-out horses that this peculiar institution is not so necessary there as elsewhere.

In reply to an article by E. C. Drury, which appeared in the last issue of this magazine. By James Merrill10 min
December 11910