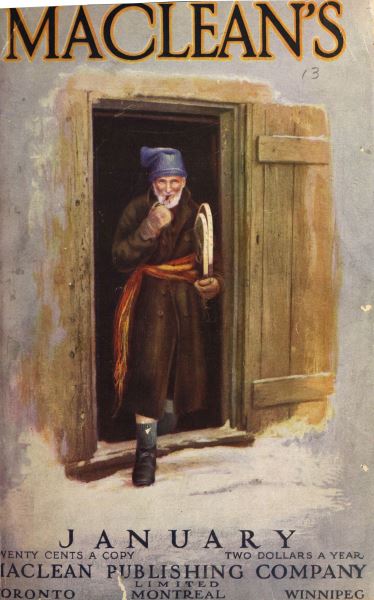 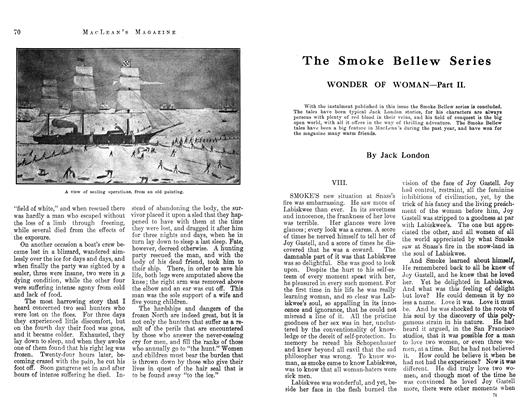 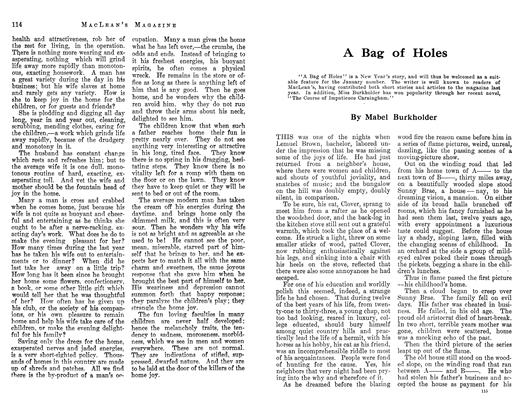 A Bag of Holes 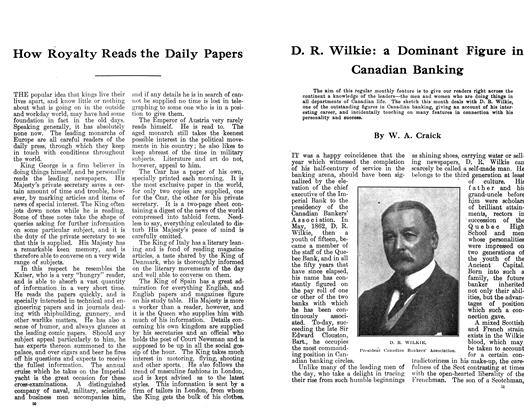 A Bag of Holes

THIS was one of the nights when Lemuel Brown, bachelor, labored under the impression that he was missing some of the joys of life. He had just returned from a neighbor’s house, where there were women and children, and shouts of youthful joviality, and snatches of music; and the bungalow on the hill was doubly empty, doubly silent, in comparison.

IT was a happy coincidence that the year which witnessed the completion of his half-century of service in the banking arena, should have been signalized by the elevation of the chief executive of the Imperial Bank to the presidency of the Canadian Bankers’ A s s o c i ation.

IT was early spring when I took up my quarters in the Slatewater district, and the many lakes and creeks that intercept the country like a great network were still at winter level. Dave Sharman’s ranch had just been put up for sale, and I bought it at a mere song, considering the price of apple grounds about there, and on the whole was thoroughly well pleased with myself. By H. Mortimer Batten14 min

IN the December number Mr. Editor explained why he and the proprietor, Colonel MacLean, who “has' always held anti-reciprocity, high protection views,” afford space each month to disquisition by the present writer, who favors “free trade and direct taxation” as the ideal policy for Canada and every other country. By Edward William Thomson14 min

How Weak Lungs Made Canadian Millionaires

IS THERE some virtue in lung troubles? To most people the question will appear almost absurd. All they know about pulmonary diseases has mighty little virtue in it. But that is merely one side of the picture, and it is the darker side at that. By James P. Moir13 min

Gagen, The Painter of the Sea

“LOVE of the sea and the river has alwas held first place in my affections. Scarcely a year has passed, since I was a boy, but it has seen me paddling, swimming, playing, dreaming, chatting, and sketching in and out of the briny. Shipmen and fisherfolk have been my companions, and I am thoroughly familiar with everything that floats, and with every mood of the watery elements. By John E. Staley13 min

Driving Steel Through a Wilderness

IT IS ONE of the hallucinations of the human mind to imagine that the other fellow always has I he easier job. The tendency to magnify the burden of one’s own tasks is deep-seated. That is why you will find a divergency of opinion as to whose share in the work of building such a railway as the National Transcontinental has been the most onerous. By W. C. Arnott12 min

A Bird of Bagdad

WITHOUT DOUBT much of the spirit and genius of the Caliph Harun Al Rashid descended to the Margrave August Michael von Paulsen Quigg. Quigg’s restaurant is in Fourth Avenue—that street that the city seems to have forgotten in its growth. Fourth Avenue—born and bred in the Bowery —staggers north full of good resolutions. By O. Henry11 min
December 11912