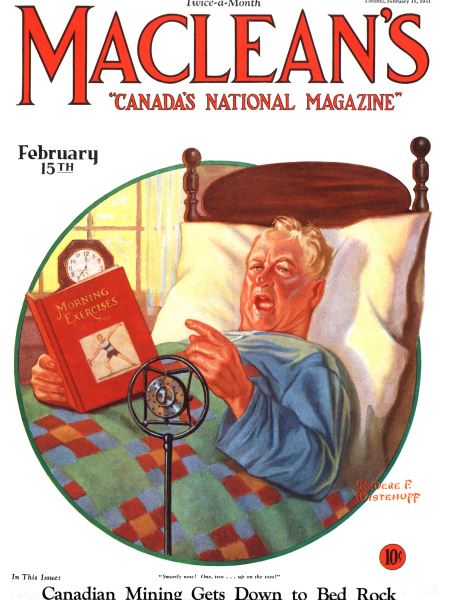 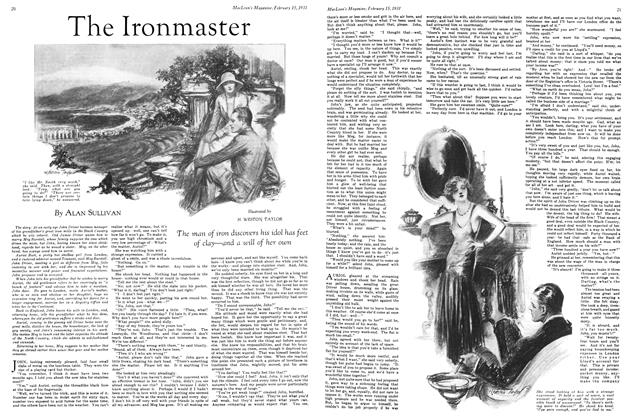 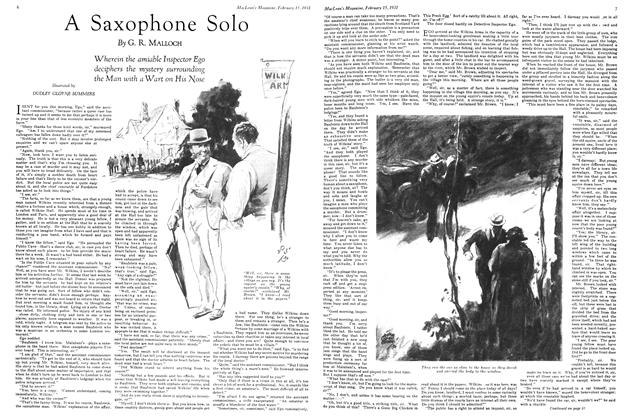 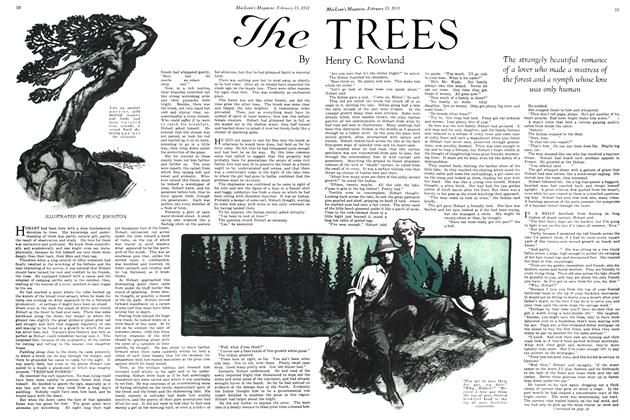 The story: Alan early age John Driver becomes manager of his grandfather’s great iron mills in the Black Country which he will inherit. Old James Driver wants him to marry Meg Burstall, whose family supplies the coal which drives the mills, but John, having known her since childhood, regards her as he would a sister.

I SENT for you this morning, Ego,” said the assistant commissioner, “because rather a queer case has turned up and it seems to me that perhaps it is more in your line than that of less eccentric members of the force.” “Many thanks for those kind words, sir,” murmured Ego. By G. R. MALLOCH

HOBART had been born with a deep fundamental devotion to trees. His knowledge and understanding of them was partly natural gift, partly the result of observation and study. His love for them was instinctive and profound. He knew them scientifically and academically and one might even say metaphysically, because he felt himself see into them more deeply than their bark, their fibre and their sap. By Henry C. Rowland

I'ATES to say anything against any man,” said Spike Molton darkly, his sparrowlike face glowering. “Especially me bein’ an Englishman and 'im a blinkin’ Canadian. But these here men wouldn’t be so ready to cheer him if they only knowed how he got that medal.” By W. REDVERS DENT

DID I ever hear o’ mariners comin’ back to life after bein’ thought dead — did I?” Captain Jonas Hallan leaned forward, glared at his questioner for a moment, then laughed derisively and sank back against the leather cushions of the best chair in the Pilot Rooms. By LOUIS ARTHUR CUNNINGHAM

Mining Gets Down to Bed Rock

WHEN the average Easterner visualizes the West he sees thousands of miles of rolling prairies, fields of golden grain, a few cities, one or two in each province, loosely linked together by towns and villages with board sidewalks as an “improvement." By JOHN ARMITAGE

ITS honeymoon of office over, and with prosperity still on vacation, Mr. Bennett’s Ministry faces Parliament beset by tribulations. War cabinets had their trials, encountered hard problems, but it is doubtful whether any government before, during, or since the war met anything like the thronged troubles in Mr. Bennett’s path. By A POLITICIAN WITH A NOTEBOOK

IF YOU looked for the biggest Bible class in the world in London or New York you would be disappointed. It meets in Metropolitan Church, Toronto, which holds close to 2,000 people, and is always packed to the doors. You wouldn't ask, “How did it get that way?”