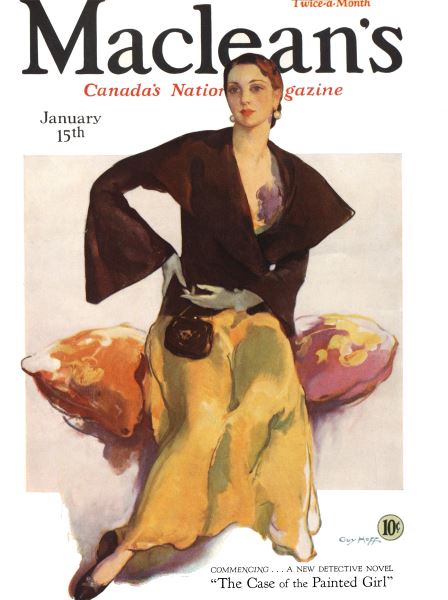 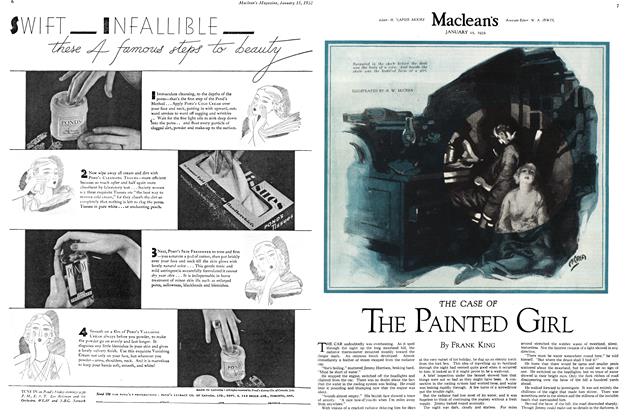 THE CASE OF THE PAINTED GIRL 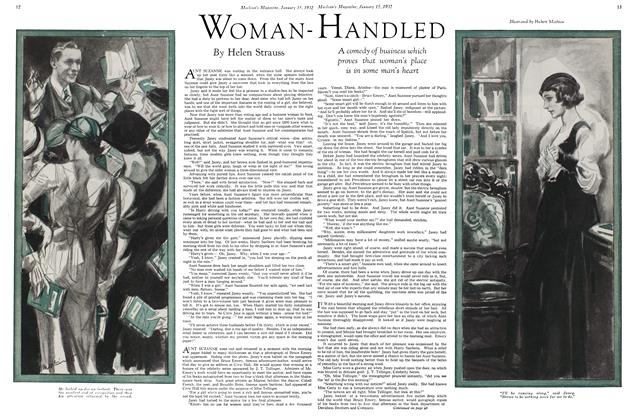 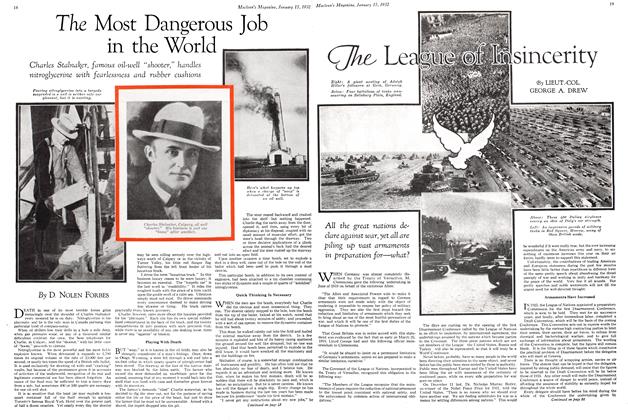 The League of Insincerity

THE CASE OF THE PAINTED GIRL

THE CAR undoubtedly was overheating. As it sped through the night up the long moorland hill, the radiator thermometer mounted steadily toward the danger mark. An ominous knock developed. Almost immediately a feather of steam escaped from the radiator cap.

AUNT SUZANNE was waiting in the entrance hall. She always took up her post there like a sentinel, when the noise upstairs indicated that Janey was about to come down. From the foot of the stairs Aunt Suzanne could give Janey a once-over that took in everything from the lace on her lingerie to the top of her hat.

The League of Insincerity

WHEN Germany was almost completely disarmed by the Treaty of Versailles, M. Clemenceau gave the following undertaking in June of 1919 on behalf of the victorious Allies: “The Allies and Associated Powers wish to make it clear that their requirements in regard to German armaments were not made solely with the object of rendering it impossible to resume her policy of military aggression.

AS A RULE Mr. Rayburn, who was stout and fond of his comfort, disliked making journeys by train, however short, almost as much as he disliked making casual friendships, however brief. But today his mood was mellow, even sentimental. He was going home. By W. TOWNEND23 min

THE outset of this, the final article of the current series, the writer desires to make it clear that what follows is in no sense an attempt to “solve” the railway problem. For a mere layman to make such an attempt in the face of the fact that the whole matter of transportation is now under review by a governmental commission of experts would be the height of imprudence, not to say of absurdity. By W. A. IRWIN23 min

WHEN Mr. Stapleton stepped out of the elevator he hoped, as he had hoped for several mornings, that he would be able to cross the lobby of the Chateau Arms without catching the desk clerk’s eye. Not because Mr. Stapleton was in arrears with his account. By STEPHEN VINCENT BENET19 min

I SEE,” said Captain Jonas Hallan, squinting at a crumpled copy of the morning paper that someone had left in the pilot rooms, “how they’re diggin’ for buried treasure down along the south shore o’ Nova Scotia. Great thing that—buried treasure, doubloons an’ pieces of eight. By Louis Arthur Cunningham18 min

ONE lone voice piped this ditty, and the rest of us listened glumly. It was late in October, wet, and chilling to the bone. We had come to Ypres and were in the shell-wrecked Asylum, waiting for darkness before moving out into the foul flats of the Salient. By WILL R. BIRD14 min

The Most Dangerous Job in the World

DEATH in one of its most terrible forms grins menacingly over the shoulder of Charles Stalnaker every moment he is on duty. Nitroglycerine is his playmate, and he is the only man in Canada pursuing this particular kind of companionship. When oil drillers lose their drills in a hole a mile deep, when gas pressures wane, or any of a thousand similar difficulties confront the crew, the boss telephones for Charlie, in Calgary, and the “shooter,” with his little cans of “boom,” proceeds to operate. By D. NOLEN FORBES11 min

A SWELL PLACE TO LIVE

A MR. RALPH THORPE, who comes from the West but nowadays rides on Toronto street cars, has remarked in Maclean's that the place gives him a pain; which causes simple fellows like me to wonder why he continues to reside there. In retort, along comes my boon companion, William Arthur Deacon, another Westerner, with a companion piece suggesting that “Toronto Can Afford to Smile.” By LESLIE ROBERTS11 min
January 11932