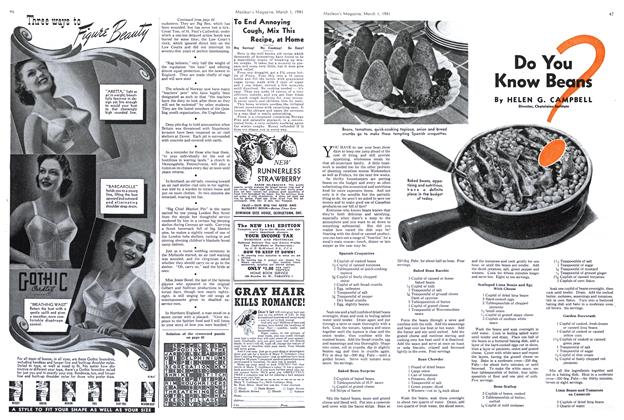 Do You Know Beans 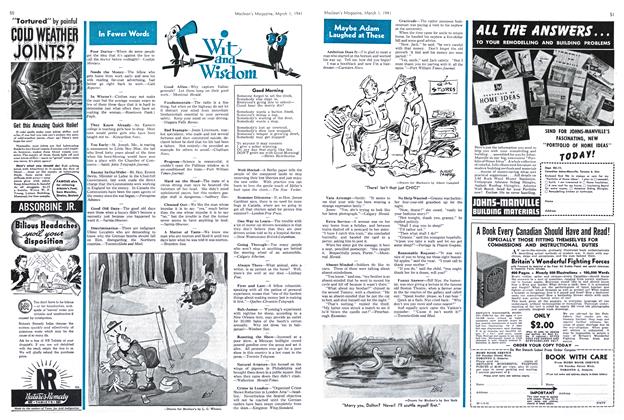 Concluding a 22,000-mile survey, a Maclean's observer reports on the living mosaic of peoples and customs, wealth and poverty, new and old, that is South America

Do You Know Beans

YOU HAVE to use your bean these days to keep one jump ahead of the cost of living and still provide appetizing, wholesome meals for that all-important family. A little head-work is needed too for the other problem of planning meatless menus Wednesdays as well as Fridays, for the next few weeks.

WALTER knew as soon as he came home that Julia had been there. He had only to see the two bright spots high on Margaret’s cheeks and the tight, set smile on her mouth. There were other physical evidences, too, in the living room. The blinds were drawn almost to the sills although it was still bright outside, for Julia preferred shadows to sunlight. By EVE BURKHARDT24 min

UP ALONG Nan Valley, in the sugar maple hills, Barney Delaney’s carefree habits and quick thinking had gained him a reputation long before he was sixteen. “He’s always up to tricks,” everyone said. “You can never depend on him.” All the village had heard him say he never intended to be a farmer or a woodsman. By WILL R. BIRD23 min

TO HAND is a belated report from Meskanaw, Sask., dealing with the perverse predicament a young man, now serving with the C.A.S.F., found himself in simply because, being a methodical sort of chap, he wished to appear at his best for a Saturday night dance, and took careful steps toward that end.

WE don’t know when the very first war took place, or who fought it, but flint arrow-heads are among the oldest exhibits, and the flint head arrow was not only the beginning of man’s ascendancy in the animal world, but of his ascendancy over his unarmed human contemporaries.

Two Dollars will be paid for each War Oddity accepted and published in this column. Address contributions to War Oddities, Maclean’s Magazine, 481 University Ave., Toronto. Source of the information must be given. In a blacked-out church at Melton, England, hymns were sung from a twelve-foot lantern sheet instead of from hymnbooks, thus doing away with the need for lights.

By A POLITICIAN WITH A NOTEBOOK