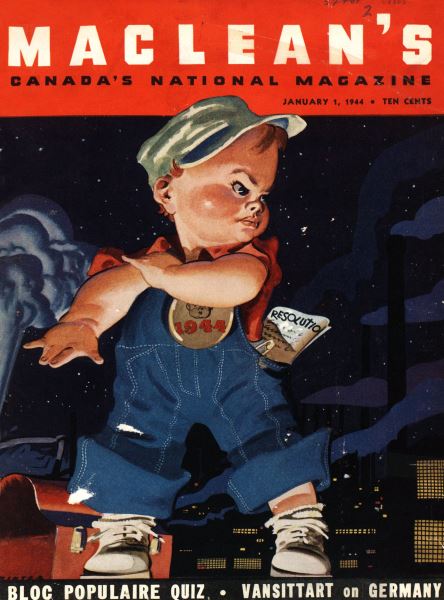 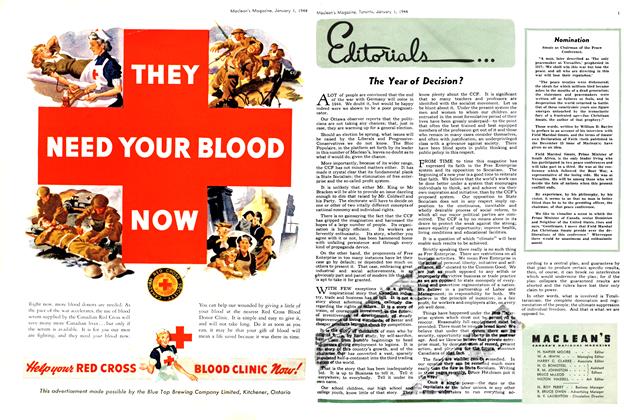 The Year of Decision? 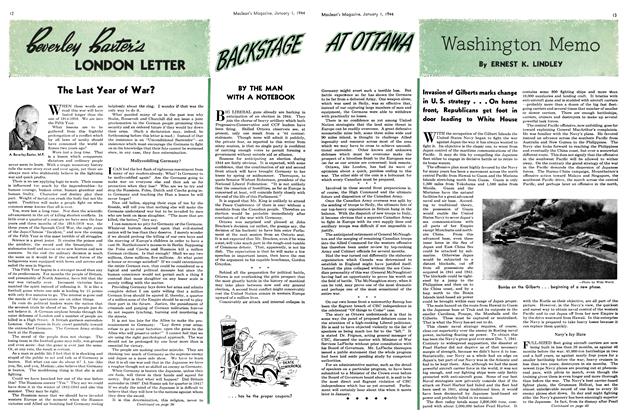 The Last Year of War? 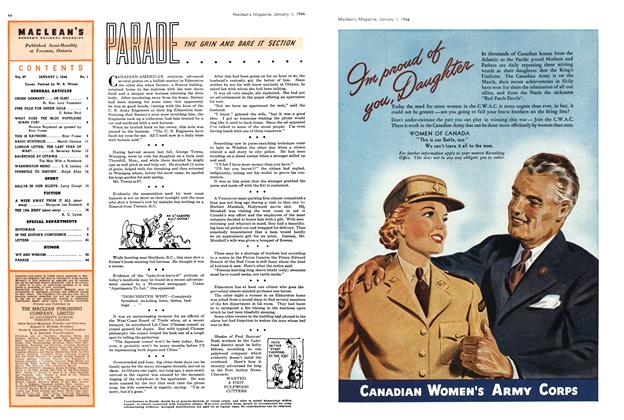 PARADE THE GRIN AND BARE IT SECTION

The Year of Decision?

A LOT of people are convinced that the end of the war with Germany will come in 1944. We doubt it, but would be happy indeed were we shown to be a poor prognosticator. Our Ottawa observer reports that the politicians are not taking any chances; that, just in case, they are warming up for a general election.

The Last Year of War?

WHEN these words are read this war will have lasted longer than the one of 1914-1918. We are into the Fifth Year. What lessons are to be gathered from this frightful prolongation of a conflict which by all laws of sanity should have consumed the world in flames two years ago? Wars last a long time.

PARADE THE GRIN AND BARE IT SECTION

CANADIAN-AMERICAN relations advanced several points on a bullish market in Edmonton the other day when Barney, a Boston bulldog, returned home to his mistress with his tear ducts fixed and a snappy new harness adorning his little body. After wandering away from his home, Barney had been missing for some time—but apparently he was in good hands, visiting with the boys of the U. S. Army Engineers at their big Edmonton base.

Here is the story behind the Canadian Navy’s discovery of a secret remedy for seasickness By E. BAKER REID15 min

BIG LIBERAL guns already are barking in anticipation of an election in 1944. They join the chorus of heavy artillery which both Progressive-Conservative and CCF leaders have been firing. Skilled Ottawa observers see, at present, only one result from a ’44 contest: stalemate. By THE MAN WITH A NOTEBOOK4 min

WE DON’T say this in a superior way, but magazine editors make their New Year resolutions a long time ahead. They have to. So many arrangements and so many people are involved in carrying them out. Even then, other people’s resolutions keep getting in the way.

"Compared with radio the theatre is crystal-clear and simple, and the movies seem a straightforward manufacturing process like making cheese" By MERRILL DENISON15 min

Turnabout—A commercial traveller, looking at the dingy shop, asked the shopkeeper: “How in the world do you make a go of things at all?” The tradesman pointed to the other end of the shop and said: “You see that fellow there? Well, he works for me and I can’t pay him; so in two years he gets the shop.

SALLYS IN OUR ALLEYS

Map-Happy—Comes now the tedious task of undoing all the geography that Adolf made up as he went along. —Sudbury Star. Wee Wisdom—Diplomacy is the art of letting someone else have your own way.—Galt Reporter. Griddle Aches?—The bridegroom and 15 guests took sick at a Montreal wedding.

A Week Away from it All