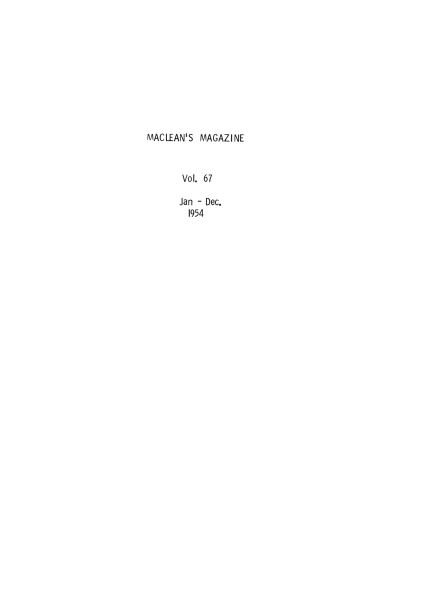 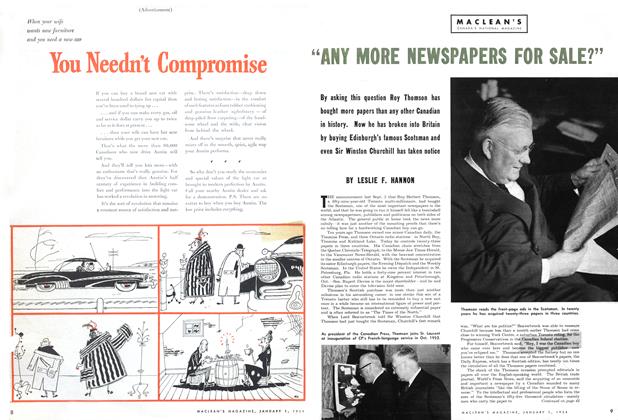 “ANY MORE NEWSPAPERS FOR SALE?” 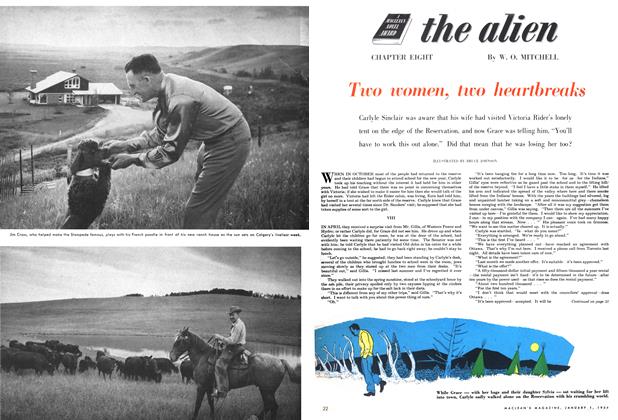 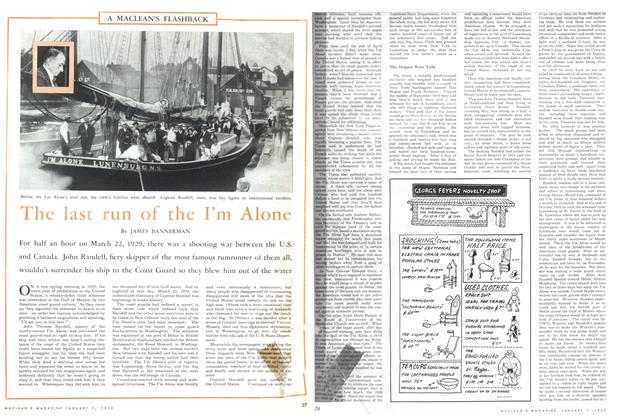 The last run of the I’m Alone

“ANY MORE NEWSPAPERS FOR SALE?”

THE announcement last Sept. 2 that Roy Herbert Thomson, a fifty-nine-year-old Toronto multi-millionaire, had bought the Scotsman, one of the most important newspapers in the world, and that he was going to run it himself fell like a bombshell among newspapermen, publishers and politicians on both sides of the Atlantic.

WHEN IN OCTOBER most of the people had returned to the reserve and their children had begun to attend school for the new year, Carlyle took up his teaching without the interest it had held for him in other years. He had told Grace that there was no point in concerning themselves with Victoria; if she wished to make it easier for him then she would talk of the girl no more.

The last run of the I’m Alone

ON A raw spring morning in 1929, the tenth year of prohibition in the United States, a whisky-laden little schooner was overtaken in the Gulf of Mexico by two American coast guard cutters. As they came up they signaled the schooner to heave to at once—an order her captain acknowledged by grabbing a battered megaphone and shouting, “I’ll see you in hell first!” John Thomas Randell, master of the ninety-tonner I’m Alone, was convinced the coast guards had no right to stop him.

It’s the same if we go to a doctor. He’s always supplying us with the latest joke while he taps our knees, peers down our throats and pumps air around our arms. “Did you hear why the Brooklyn kid put the television set on the stove?” he asks, prodding a tonsil. By LEONARD K. SCHIFF

But the United States will do stupid things in 1954. Because of internal pressure from organized groups she will probably force down the price of rubber in Malaya until the workers on the plantations will be so badly paid that they will be ripe for Communism and revolution.

from eight years ago, when we were post-graduate English students at the University of Toronto—sitting in the reference library looking worried. We go home, spread out our notes and start working for gags. We pace the floor, chew our nails, teeter, peer out windows, frown, shake our heads and sometimes get stymied and just sit there for hours on end looking at one another without saying a word.

Canadian authorities dislike the methods of Senators Jenner and McCarthy, the techniques that John Diefenbaker recently called “Trial by Television.” They not only felt this strongly as individuals but they also believed—and the cabinet’s mail has tended to confirm—that most Canadian citizens feel the same way.

THERE IS A general impression in the rest of Canada that Calgary consists entirely of palefaces dressed as cowboys and Indians dressed as Indians. To anyone visiting the foot-hills city during a certain July week, as Yousuf Karsh did, this theory would be fully substantiated.

A SORROWING Greek slave suspiciously resembling Victor Mature, gazing at the Cross in a close-up so immense that his anguished face measured twenty feet from ear to ear, was the most spectacular movie phenomenon offered in 1953. But The Robe, based on the Lloyd C. By CLYDE GILMOR

A JUNIOR Sunday school in Lakefield, Ont., had a project with Plasticine one morning to construct objects mentioned in the Bible. One six-year-old built a wonderful model of Noah’s ark, complete with television aerial. A young mother in Burlington, Ont., has solved the problem of between-meal handouts which neighbors kept giving her three-year-old daughter.