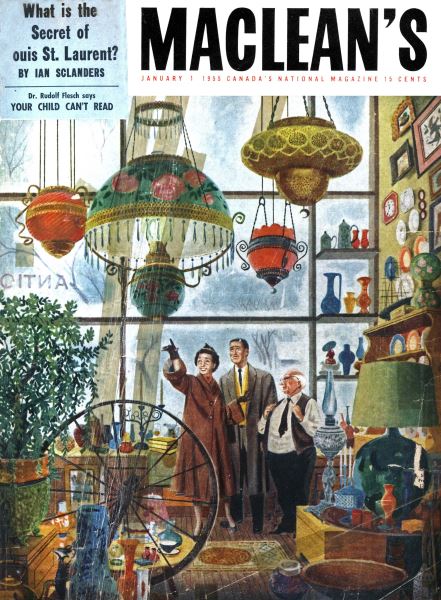 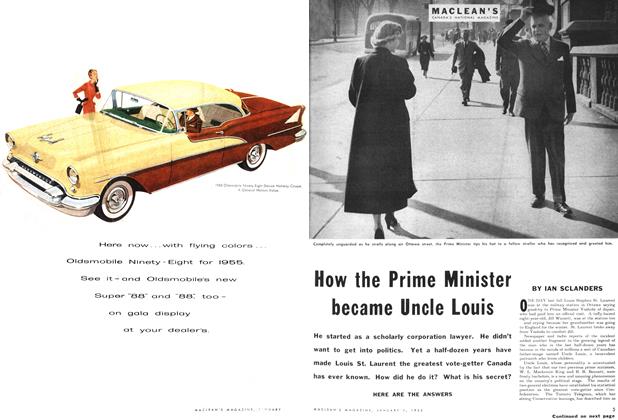 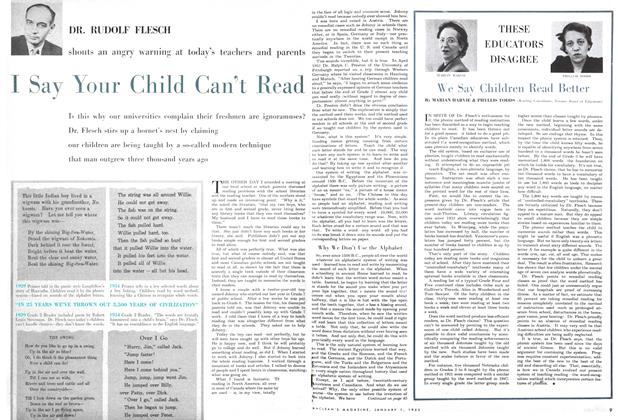 I Say Your Child Can’t Read 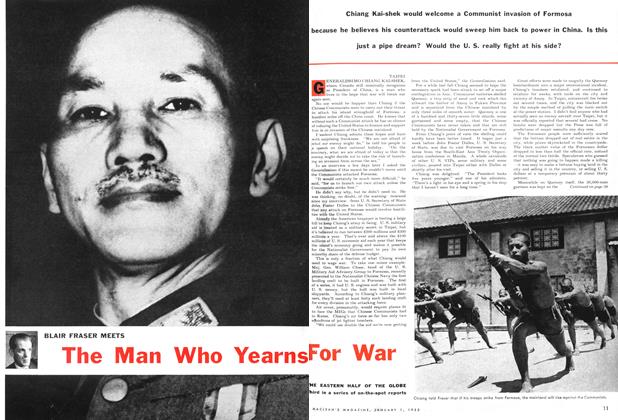 BLAIR FRASER MEETS The Man Who Yearns For War

ONE DAY last fall Louis Stephen St. Laurent was at the railway station in Ottawa saying good-by to Prime Minister Yoshida of Japan, who had paid him an official visit. A taffy-haired eight-year-old, Jill Winnett, was at the station too and crying because her grandmother was going to England for the winter.

I Say Your Child Can’t Read

BLAIR FRASER MEETS The Man Who Yearns For War

TAIPEI GENERALISSIMO CHIANG KAI-SHEK, whom Canada still nominally recognizes as President of China, is a man who lives in the hope that war will break out again scon. No one would be happier than Chiang if the Chinese Communists were to carry out their threat to attack his island stronghold of Formosa, a hundred miles off the China coast.

Forty Million Dollars Worth of Snow

IN MOST AREAS of Canada a heavy snowfall is rated all the way from a bit of a nuisance to a traffic-snarling calamity. But in the Laurentians, a sixty-mile jumble of ancient low mountains and small glacial lakes that begins just thirty miles north of Montreal, the inhabitants file solemnly into their pretty village churches and pray earnestly for snow. By KEN JOHNSTONE

ONCE UPON A TIME, when Joe DiMaggio was still married to Marilyn Monroe, newspapermen were dispatched to Tokyo to report to the breathless world on the honeymoon appearances of the happy pair. They had no trouble finding the bride, who was conscientiously combining business with pleasure singing torch songs to U. S. soldiers in Japan. They did have trouble finding the groom. By DOROTHY SANGSTER

TO everyone’s astonishment, the four Soviet psychiatrists who attended the Fifth International Congress on Mental Health in Toronto last August turned out to be a remarkably friendly and affable group of scientists, constantly smiling, shaking hands and passing around cigarettes to Western colleagues. By SIDNEY KATZ

Who destroyed the Earth?

THE FAT little space ship cruised deeper into the newly found solar system—a neat, ordinary system with a healthy sun lighting a cluster of nine well-behaved planets and their satellites. Everyone on the ship— from venerable Navigator to little Foodserver—stayed as close as possible to the viewing screens. By ROBERT WOLF EMMETT

NOT ALL naval battles are fought at sea. Sometimes they are fought behind the scenes on dry land, and as an example I would cite the recent appointment of Admiral Earl Mountbatten of Burma to the post of First Sea Lord. Before we deal with the drama of this appointment I must remind you that the English have their own way of doing things. By Beverley Baxter

IMMIGRATION officials here would welcome a visit from the Canadian Bar Association subcommittee that presented a stinging report on the Immigration Department last September. They think they could show the lawyers that out here on the edge of China problems keep turning up that are not in the book. By BLAIR FRASER

MOVIES WERE wider, brighter, louder and in some respects better than ever in 1954. Celluloid trash was still being produced on both sides of the Atlantic, and some of the trash was prospering at the box office. By and large, however, the hackneyed slogan of “quality rather than quantity” was finally getting more than mere lip service from the film industry.
December 151954