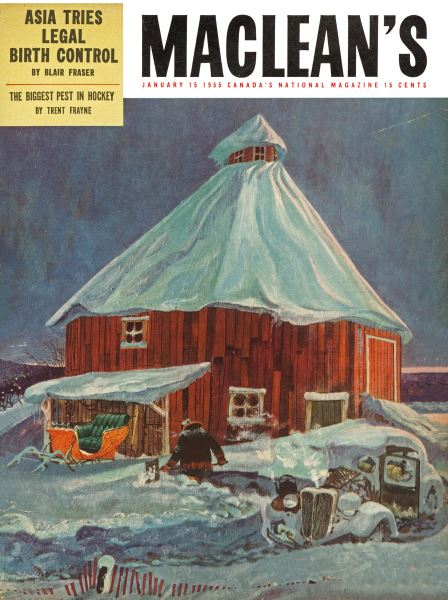 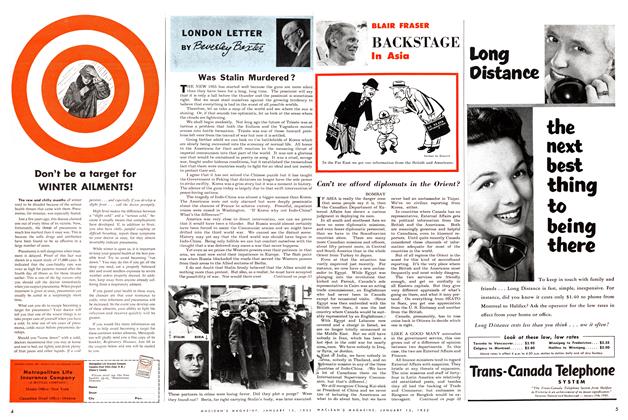 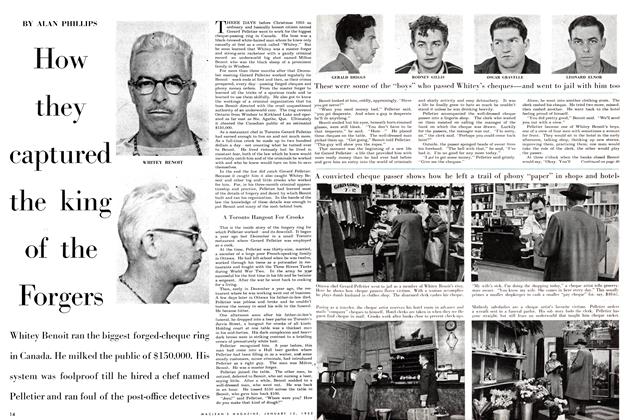 How they captured the king of the Forgers 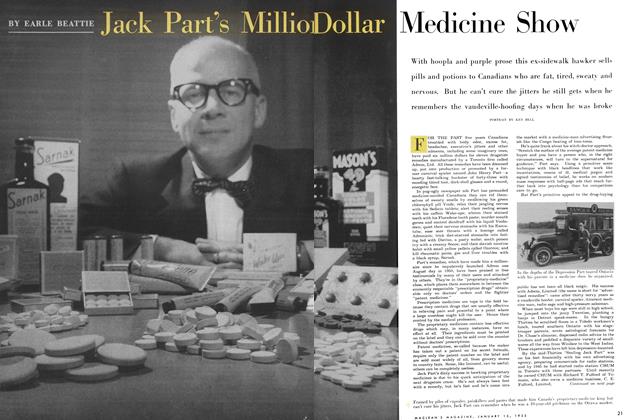 IF ASIA is really the danger zone that some people say it is, then the Canadian Department of External Affairs has shown a curious judgment in deploying its men. In all south and southeast Asia we have no more diplomatic missions, and even fewer diplomatic personnel, than we have in the Scandinavian countries alone.

How they captured the king of the Forgers

Whitey Benoit ran the biggest forged-cheque ring in Canada. He milked the public of $150,000. His system was foolproof till he hired a chef named Pelletier and ran foul of the post-office detectives

With hoopla and purple prose this ex-sidewalk hawker sells pills and potions to Canadians who are fat, tired, sweaty and nervous. But he can’t cure the jitters he still gets when he remembers the vaudeville-hoofing days when he was broke

AN EDMONTON family built themselves a fine new house outside the city but had a terrible time getting water. They drilled five wells before they had any luck, and it was consequently a great relief when they finally moved in for the woman of the house to find she could turn on the taps and have water gush out just like in town.

With an insight as sharp—and objective —as a surgeon’s knife the most eminent philosopher of our time lays bare the motives of man as a political animal. His cure for advocates of a preventive war is enough to make your hair stand on end

THE VANISHING PRAIRIE: Walt Disney's eighth live-action nature film, his second of feature length, probably will bring him another Oscar. If so, the honor will be, on the whole, well earned: the picture, though marred at times by the usual coy touches in music and commentary, is a fascinating camera prowl among the animal denizens (including prairie dogs, right) of the Great Plains of America. By CLYDE GILMOUR3 min

A CARD FROM THE Comtesse

The tiresome romantic tangle of the scatterbrained Lois was tidied up and Scott could now return to his serene routine. But could he? As he walked down the stairs he accepted By RONALD R. SMITH22 min

5859
IN THE EDITORS' CONFIDENCE

We’re Looking for a Prize Winner

FOR THE past few weeks secret documents have been floating around our offices. These mysterious manuscripts are candidates in our current short-story contest and they have all the special glamour of a surprise package. Half an hour from now, when we pick up the next story —this one marked 227—we may find ourselves reading the $1,500 prize winner.

Forty million babies will be born this year on a continent that can’t feed everybody now. Will one of the most fateful and controversial experiments in history solve the problem? By BLAIR FRASER16 min

Last seeding time, this farmer was saying: “It’s high time we got rid of that sleigh. That’s a good place to keep the new tractor.” Now, with winter here and the farm flivver stalled, he’s thinking he was smart to be lazy. For artist James Hill the interesting thing was not the flivver or the sleigh but the multi-sided barn, which he saw last year on the New Brunswick shore of Bay Chaleur and sketched till cold numbed his fingers.

The biggest PEST in hockey

LITTLE TONY LESWICK heckles the stars and wins games while they’re mad at him. His tactics bring bruises and stitches by the score, but he’s proud to boast: “I’ve been cut by some of the best players no longer in hockey. They’re all washed up—I’m still around.” By TRENT FRAYNE16 min

She shows that women nurture flairs For other things than domesticity. A latent aptitude is theirs For public office and affairs Especially if the public shares A preference to have those affairs Discharged with maximum publicity. By P. J. BLACKWELL1 min

The day the atom ran wild

Ever since man harnessed the atom he has worried about a radioactive pile going wrong. Here's the gripping story of how a group of Canadian scientists became the first to face this unknown danger By DAVID O. WOODBURY15 min
January 11955