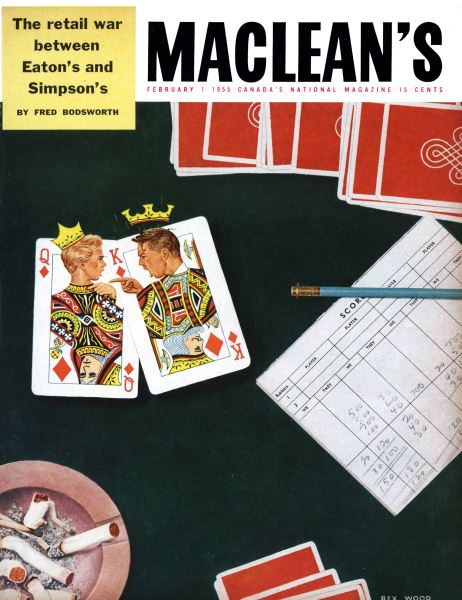 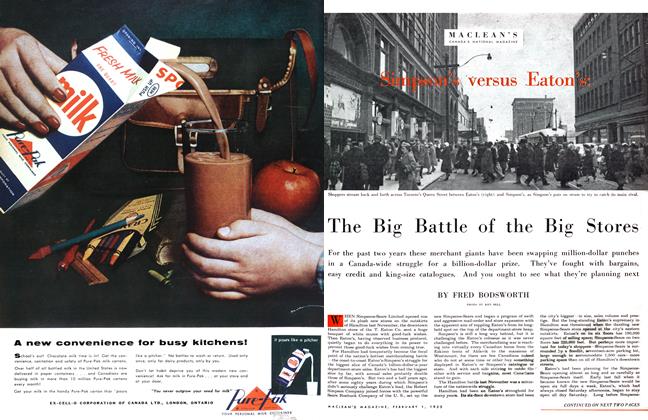 The Big Battle of the Big Stores 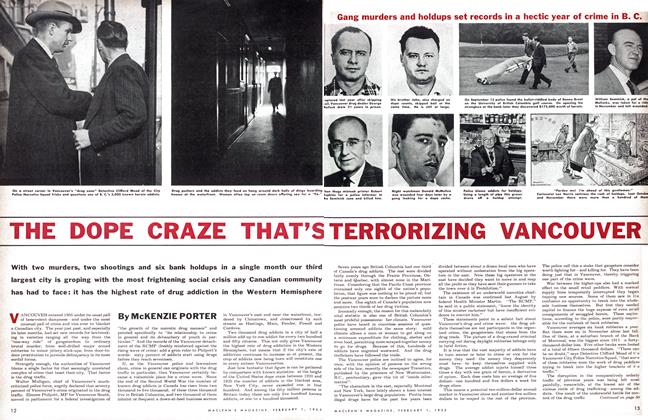 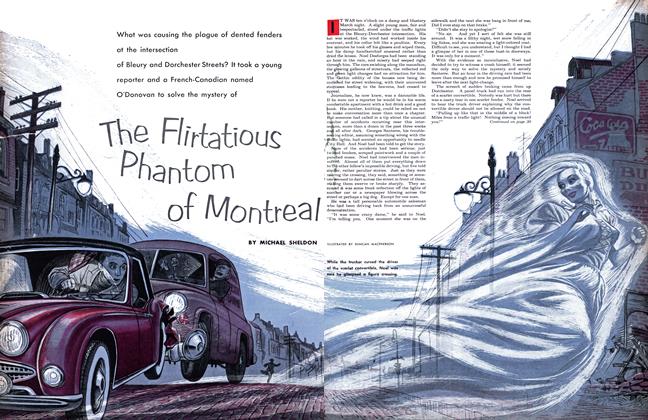 The Flirtatious Phantom of Montreal

The Big Battle of the Big Stores

WHEN Simpsons-Sears Limited opened one of its plush new stores on the outskirts of Hamilton last November, the downtown Hamilton store of the T. Eaton Co. sent a huge bouquet of white mums with good-luck wishes. Then Eaton’s, having observed business protocol, quietly began to do everything in its power to prevent those good-luck wishes from coming true.

VANCOUVER entered 1955 under its usual pall of benevolent dampness—and under the most unusual pall of crime and vice ever to blanket a Canadian city. The year just past, and especially its later months, had set new records for lawbreaking in varieties ranging all the way from the “one-way ride” of gangsterdom to ordinary brutal murder; from well-drilled major armed robberies to minor jittery stick-ups; from door-todoor prostitution to juvenile delinquency in its most sordid forms.

The Flirtatious Phantom of Montreal

IT WAS ten o’clock on a damp and blustery March night. A slight young man, fair and bespectacled, stood under the traffic lights at the Bleury-Dorchester intersection. His hat was soaked, the wind had worked inside his overcoat, and his collar felt like a poultice.

AT EIGHT o’clock in the evening of last Ash Wednesday the first of four weekly Lenten Retreats was about to begin in Montreal’s St. Stanislaus parish hall. A noted Dominican, Rev. Marcel Desmarais, was conducting the service when he noticed a woman fidgeting nervously in her seat. By KEN JOHNSTONE

The Squalid Mess in Indo-China

THERE’S A KIND of grim comedy about the task Canada faces in Indo-China. As things look now it’s quite likely the Communists will come to power here by peaceful constitutional means, the first such victory Communists have ever won anywhere. By BLAIR FRASER

How to avoid a third world war

IF A world war were to begin tomorrow there would be three logically possible issues: there might be a victory of the West; there might be a Communist victory; or the war might end in a draw. In this last event, there would remain two future possibilities: the resulting peace, like the Treaty of Amiens, might be merely a breathing space during which both sides would, prepare to renew the combat as soon as possible; or it might, like the Treaty of Westphalia at the end of the Thirty Years War, mark the end of an epoch of ideological strife and inaugurate a period of mutual toleration. By RERTRAND RUSSELL

THE ONLY popular survivors of Adolf Hitler’s vision of a thousand-year Third Reich are Lilli Mar schmaltzy song about a slender dream girl, and a chubby little automobile called the Volkswagen. The song is now seldom heard but the car is firmly established aeross the world as a sort of up-to-date Model T. By PETER C. NEWMAN

The Girl Who Had No Talent

I SAW that the woman opposite me at the dinner table was bursting with a desire to startle us all but she was not going to waste it until she had our ears and our eyes. At last she saw her opportunity. “Believe it or not,” she said with a pretense of modesty that fooled no one, “I managed to get two seats in the stalls for Bea Lillie’s first night.” By Beverley Baxter

IN INDO-CHINA about 160 Canadians, 300 Poles and 500 Indians are engaged in a fairly intensive exercise in peaceful coexistence. They are working together on an International Supervisory Commission that is half umpire, half midwife to three infant democracies and an infant Communist state, and in many ways it’s like being cast up together on a desert island. By BLAIR FRASER