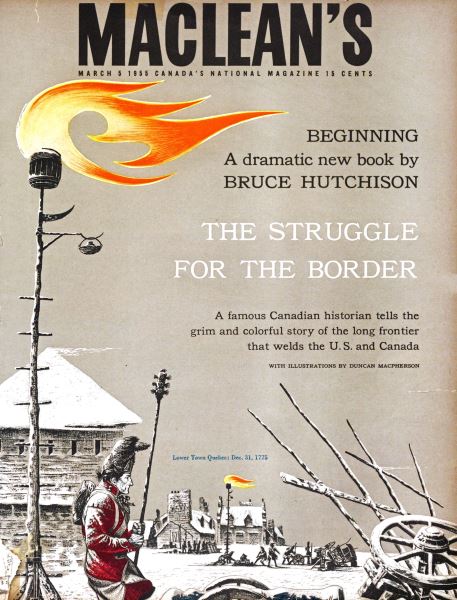 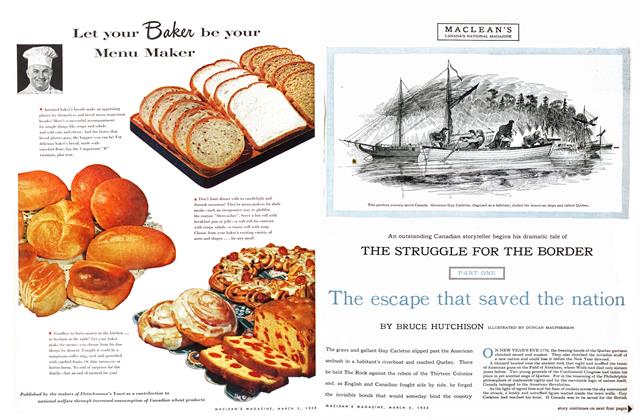 The escape that saved the nation 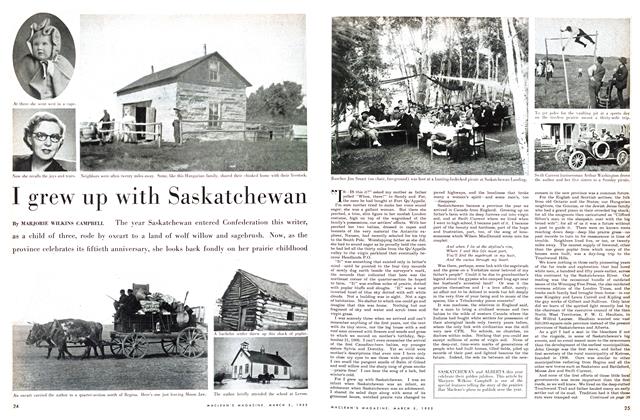 I grew up with Saskatchewan 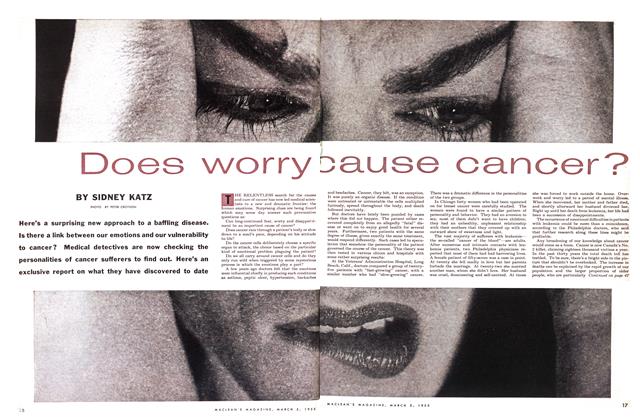 Does worry cause cancer?

1011
THE STRUGGLE FOR THE BORDER

The escape that saved the nation

ON NEW YEAR’S EVE 1775, the freezing hands of the Quebec garrison clutched sword and musket. They also clutched the invisible stuff of a new nation and could lose it before the New Year dawned. A blizzard howled over the ancient rock that night and muffled the boom of American guns on the Field of Abraham, where Wolfe had died only sixteen years before.

I grew up with Saskatchewan

"Is—IS this it?” asked my mother as father yelled “Whoa, there!” to Sandy and Pat, the oxen he had bought at Fort Qu’Appelle. I’m sure mother tried to make her voice sound eager; she was a gallant woman. But there she perched, a trim, slim figure in her modish London costume, high on top of the wagonload of the family’s possessions, our settlers’ effects.

Does worry cause cancer?

THE RELENTLESS search for the causes and cure of cancer has now led medical scientists to a new and dramatic frontier: the human emotions. Surprising clues are being found which may some day answer such provocative questions as: Can long-continued fear, worry and disappointment be an important cause of cancer?

AN ARAB businessman about to return to the desert after a holiday in England recently expressed his feelings about leaving in the following words: “The more I stay in this great London the more I feel love and deepest inclination. As the time of my departure draws near my heart beats go faster and were it not for dear home and dear family I would say, 'I shall never leave this noble city, nay the resumé of the whole world.’” By MARJORIE EARL17 min

The Best Ten-cent Ride in the World

A COOK’S TOURS official once described the twelve-minute ferry voyage across Vancouver harbor as “the best ten cents worth of travel in the world.” It’s a statement with which most of the city’s visiting globetrotters can agree. For a dime they can travel the world. By McKENZIE PORTER17 min

We just had to be alone

Alca knew that, just as surely as she knew she was in love with Tom. She couldn’t bear the spying any more, no matter what Mrs. Buhay thought By Morley Callaghan15 min

Having as much fun as a bunch of kids playing cowboys and Indians, the forty self-styled Cowichan Commandos use rotten eggs and blank ammunition as they provide an enemy to keep the militia on its toes By ROBERT COLLINS14 min

OUTSIDE Quebec, Ottawa’s recent income-tax concession may not sound like much of a story. In fact it’s the latest installment of the biggest story in Canadian politics for years—a story that conceivably might end with the collapse of the Liberal Party in that strongest of all its strongholds, Quebec. By BLAIR FRASER9 min

Can An Athlete Have Brains? By Beverley Baxter8 min

Lord Russell (Jan. 15) hardly answers his question, “What Makes Men Go To War?” His method in the conquest of fear—like much of his philosophy—is futile, not to say stupid. There is only one way to conquer fear—and it has been proven times over.
February 151955