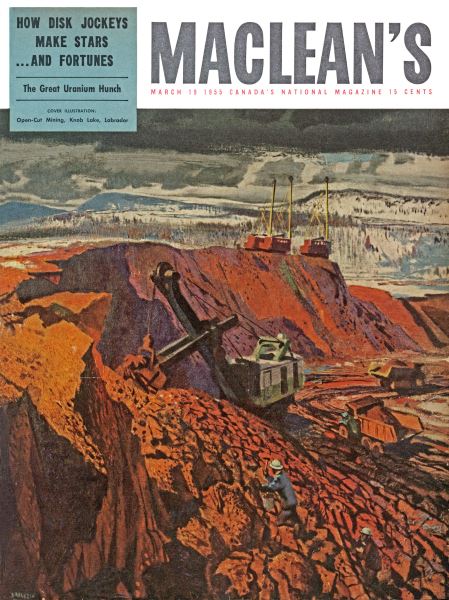 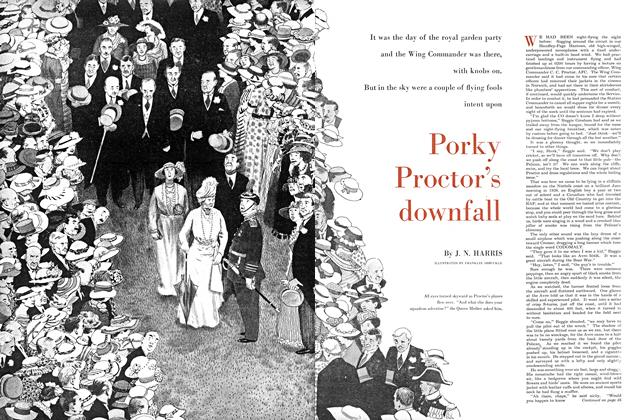 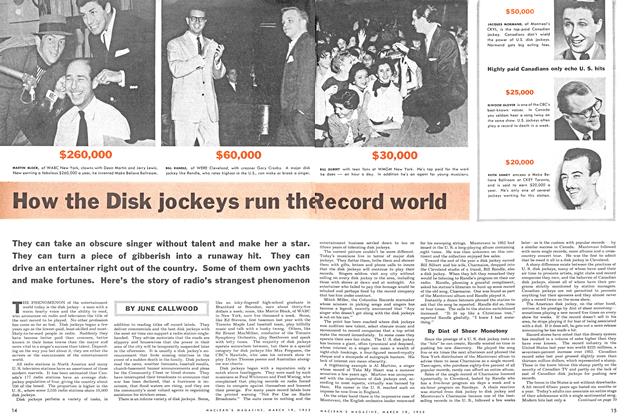 How the Disk jockeys run the Record world 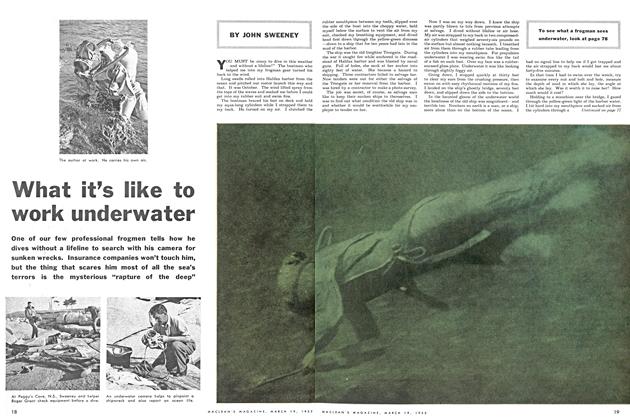 It was the day of the royal garden party and the Wing Commander was there, with knobs on. But in the sky were a couple of flying fools intent upon

How the Disk jockeys run the Record world

They can take an obscure singer without talent and make her a star. They can turn a piece of gibberish into a runaway hit. They can drive an entertainer right out of the country. Some of them own yachts and make fortunes. Here’s the story of radio’s strangest phenomenon

One of our few professional frogmen tells how he dives without a lifeline to search with his camera for sunken wrecks. Insurance companies won’t touch him, but the thing that scares him most of all the sea’s terrors is the mysterious “rapture of the deep”

The Hunch that’ll pay off in Billions

They scoffed at Franc Joubin when he insisted Algoma was rich in uranium. But, after a secret staking rush that reads like fiction, his colossal finds are now sparking the world’s biggest uranium mines and his theories have started a stampede from coast to coast By LESLIE ROBERTS18 min

The Rugged Rebel of the Theatre

Husky Douglas Campbell is an individualist in an age of conformers. He’s a pacifist and vegetarian, a renowned actor who doesn’t like grease paint or lavish sets. Instead of the mannered acclaim of city theatregoers he prefers the yippees of the Indians at Moosonee By BARBARA MOON16 min

The Year It Didn't Rain

Lakes, sloughs and wells dried up, dust filled the prairie air and the farmers’ hearts, grasshoppers got what crop was left and thousands became paupers. Who can forget 1937? By MAX BRAITHWAITE16 min

The Day They Carved Up Canada

In Paris that summer day the fatuous ministers of George III were no match for the shrewd backwoodsmen from the victorious Americas. At the stroke of a pen they gave away the life work of Canada’s great explorers By BRUCE HUTCHISON16 min

Why Big-League Goalies CRACK Up

The mayhem of modern hockey ruins their sleep; they get ulcers; they fight with their wives; they get cut by bulletlike shots. They also get pampered and paid up to $15,000 a season. But they all agree it’s not worth it By TRENT FRAYNE15 min

The Port that sighs for sail

Although Yarmouth, N.S., is agog about the new five-million-dollar ferry that will link it with Bar Harbor, Me., its heart is still back in the past when its proud windjammers beat the Seven Seas By NORMAN CREIGHTON14 min

With baubles and bargains, these Jewish women raise seventy-two thousand dollars for charities —all in one day. They insist it’s the Biggest Bazaar in the World—and they may be right. Join the crowd and snap up a dress for a dollar By JOAN DOTY11 min
March 51955