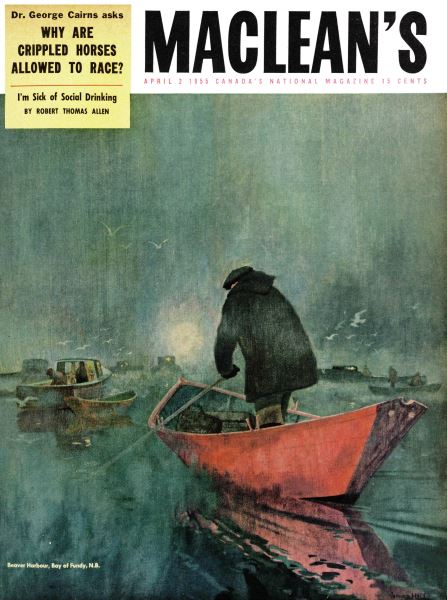 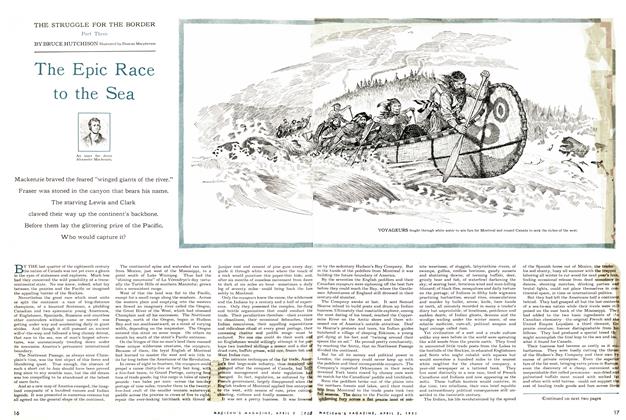 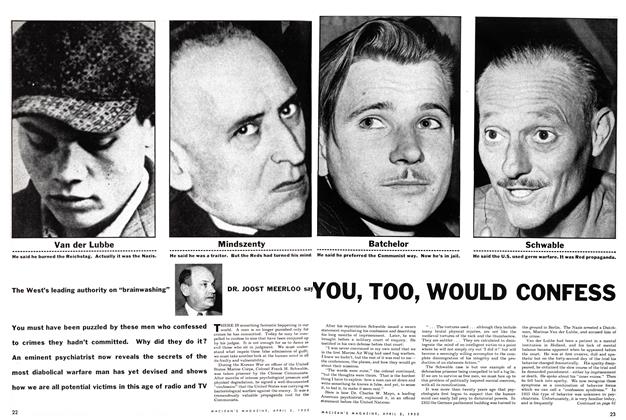 YOU, TOO, WOULD CONFESS 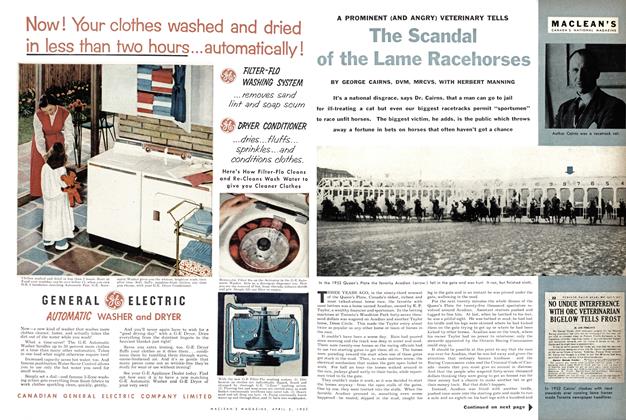 BY THE last quarter of the eighteenth century the nation of Canada was not yet even a gleam in the eyes of statesmen and explorers. Much less had they conceived the wild possibility of a transcontinental state. No one knew, indeed, what lay between the prairies and the Pacific or imagined the appalling barrier of the Rockies.

YOU, TOO, WOULD CONFESS

THERE IS something fantastic happening in our world. A man is no longer punished only for crimes he has committed. Today he may be compelled to confess to sins that have been conjured up by his judges. It is not enough for us to damn as evil those who sit in judgment.

THREE YEARS AGO, in the ninety-third renewal of the Queen’s Plate, Canada’s oldest, richest and most talked-about horse race, the favorite with most bettors was a horse named Acadian, owned by E. P. Taylor, a wealthy financier and sportsman.

IN THE SUMMER of 1918, just before the end of the First World War, a Chicago sporting newspaper named the Eye told in front-page headlines about a naval engagement that had nothing to do with the waning war at sea. Even without the sound and flash of dreadnoughts’ guns however it was arresting enough: NAVY OFFICER IN GIGANTIC COUP WINS FORTUNE AT SPA. By JAMES BANNERMAN

They all throw rocks at Davey Dunton

TEN YEARS AGO Mackenzie King plucked young Davidson Dunton from an editor’s desk in Montreal and set him down in Ottawa in the hottest seat in Canada. He made Dunton at thirtythree the first full-time chairman of the board that controls the Canadian Broadcasting Corporation— the most controversial job in Canada. By ALAN PHILLIPS

The last stronghold of the Longstockings

AFTER DRESSING FOR DINNER in the bush for nearly a century, Canada’s most die-hard community of old-fashioned British aristocrats is finally petering out. The scene of their valediction to the Kipling age is the Cowichan valley, halfway between Nanaimo and Victoria on the east coast of Vancouver Island. By McKENZIE PORTER

I’m through with social drinking

WHAT’LL I HAVE? A Moscow Mule? A Zanzibar Stinger? A Purple Seduction, with a bit of lemon? Uh—look, Mac. If it’s all the same to you, I’ll just have a cup of tea. Or if you’ve got some coffee on, that’ll be fine. Me a teetotaler? Uh-uh. I started drinking when I was about seventeen. By ROBERT THOMAS ALLEN SAYS

The shameless wooing of Clarence Patterson

IT HAD BEEN Clarence Patterson’s idea that on the day he turned sixty-five and someone took his place as bank manager, he would not stay all the time in Winnipeg but go to the West Indies or circle South America. He had his mind made up for him by Margaret, his daughter, who was married and living on the coast. By JAMES McNAMEE

Dick Bird and his photogenic friends

SEVEN YEARS AGO Walt Disney launched his True Life Adventure series, documentary films about wild creatures in their natural surroundings. To old Disney enthusiasts, it’s not surprising that he now has several new Academy Awards. Nor, considering the charm and drama of such True Life films as Beaver Valley, The Living Desert or The Vanishing Prairie, is it surprising that Disney has millions of new fans. By ROBERT COLLINS

Are we breeding a Nation of Invalids?

FOUR years ago, at a moment when our hospitals were more crowded than ever before, an experiment was undertaken to find out just how much illness there is in Canada and how much Canadians are spending trying to keep well. The federal Department of National Health and Welfare conducted a Sickness Survey among ten thousand families distributed through ten Canadian provinces. By DORIS McCUBBIN
March 191955