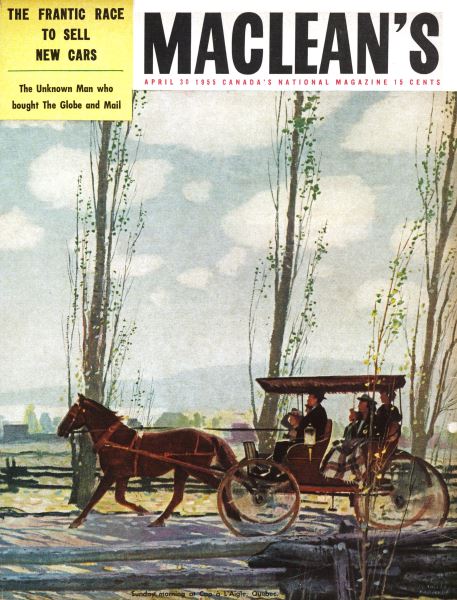 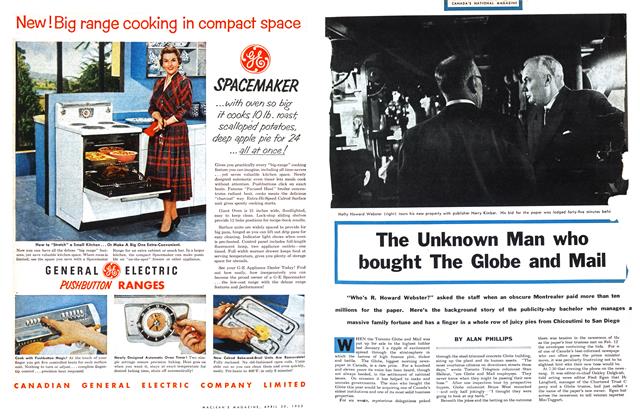 The Unknown Man who bought The Globe and Mail

How they’ll BLOW UP Ripple Rock 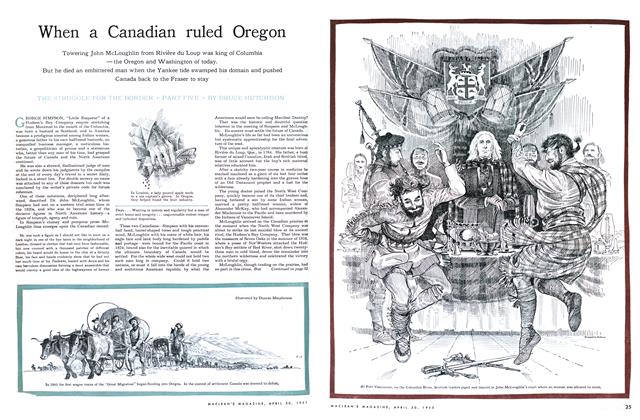 When a Canadian ruled Oregon

The Unknown Man who bought The Globe and Mail

“Who’s R. Howard Webster?” asked the staff when an obscure Montrealer paid more than ten millions for the paper. Here’s the background story of the publicity-shy bachelor who manages a massive family fortune and has a finger in a whole row of juicy pies from Chicoutimi to San Diego

How they’ll BLOW UP Ripple Rock

For decades this underwater monster in the Strait of Georgia has been wrecking ships, drowning sailors and thwarting all efforts to remove it. Now they’re going to cram it with high explosive and touch off the biggest man-made bang Canada has ever heard

When a Canadian ruled Oregon

Towering John McLoughlin from Rivière du Loup was king of Columbia — the Oregon and Washington of today. But he died an embittered man when the Yankee tide swamped his domain and pushed Canada back to the Fraser to stay

The Blonde who Leaps from the Clouds

When the stranded Yankee pilot saw a beautiful woman floating down from the skv into the northern hush lie knew everything was okay. The RCAF wouldn’t pull that sort of stunt unless it was pretty certain the lady could he retrieved By JUNE CALLWOOD20 min

The doctors in overalls who’ve changed your life

Few Canadians know about the Ontario Veterinary College whose painstaking research has cut the death rate, stretched the shopping dollar and saved farmers from ruin. Its grads can also do a barnyard Caesarian or take ont Fido's tonsils By MAX BRAITHWAITE19 min

Why I'm out of TV

Television's giving the jitters to the viewers, as well as the performers, says this famous choir leader. It's also robbing us of fine musical programs. Why can't we all just relax? By DR. LESLIE BELL17 min

The Race to Sell New Cars

The car market has been turned topsy-turvy by the hottest competition since the horseless carriage replaced the buggy. What exactly does it all mean to the man who drives a car? By DAVID MacDONALD17 min

Is There Really an Abominable Snowman?

A British mountaineer photographed the footprints; Tenzing’s kinsman says he saw one. Is the barefoot monster of the Himalayas man, monkey or myth? By WILLY LEY14 min

It was a roof for Tom and me and Julie and Kay. We hunted under it and we courted under it. Then came the summer’s day when the roof fell in By ROBERT KROETSCH14 min

In Bed With A Cold

I AM writing this in bed and in broad daylight. But I am prepared to sign an affidavit that I am of sound mind even if physically I am something between a barking dog and Vesuvius in eruption. Mark Twain did nearly all his writing in bed, which was very wise. By Beverley Baxter7 min
April 161955