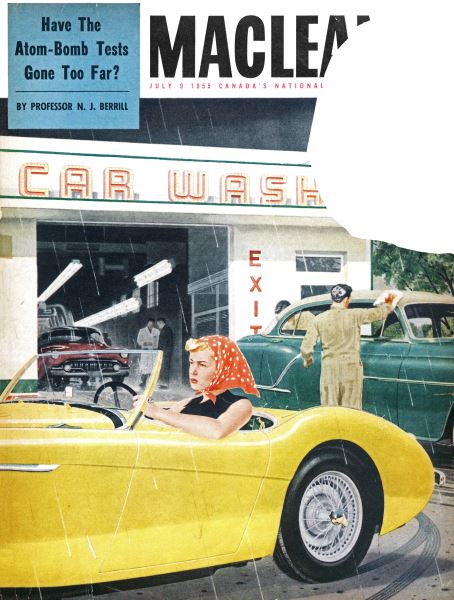 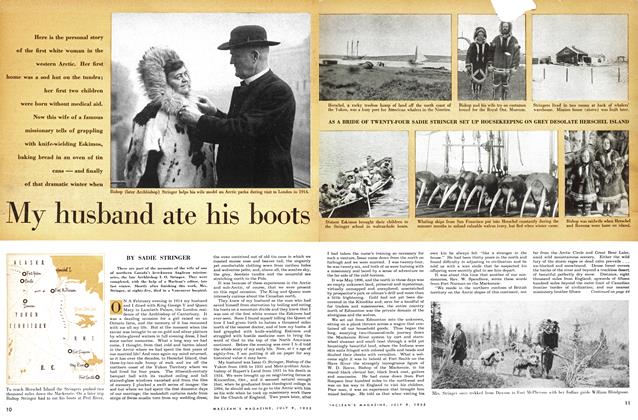 My husband ate his boots 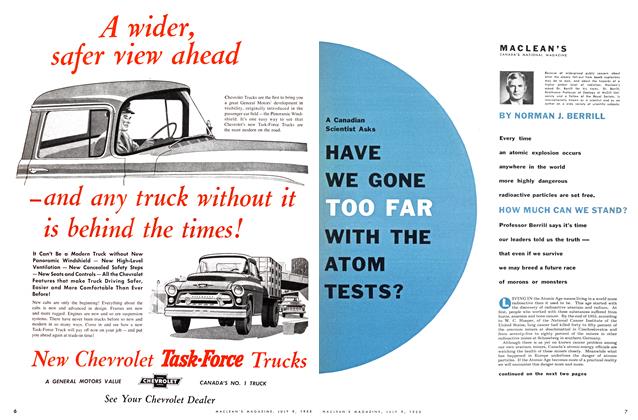 Scientist Asks A Canadian HAVE WE GONE TOO FAR WITH ATOM TESTS? 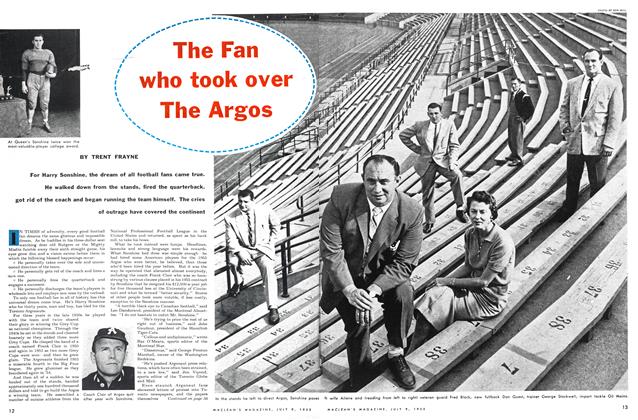 The Fan who took over The Argos

My husband ate his boots

ON A February evening in 1914 my husband and I dined with King George V and Queen Mary in Lambeth Palace, the London residence of the Archbishop of Canterbury. It was a dazzling occasion for a girl raised on an Ontario farm, and the memory of it has remained with me all my life.

Scientist Asks A Canadian HAVE WE GONE TOO FAR WITH ATOM TESTS?

LIVING IN the Atomic Age means living in a world more radioactive than it used to be. This age started with the discovery of radioactive uranium and radium. At first, people who worked with these substances suffered from burns, anaemia and bone cancer.

The Fan who took over The Argos

IN TIMES of adversity, every good football fan dreams the same glorious and impossible dream. As he huddles in his three-dollar seat watching dear old Rutgers or the Mighty Misfits fumble away their sixth straight game, his eyes grow dim and a vision swims before them in which the following blessed happenings occur: * He personally takes over the sole and uncontested direction of the team.

A WOMAN in Montreal dialed a long-distance operator recently to place two calls—one to her son who was living, she thought, in or near Sydney, N.S., and the other to her daughter, believed to be in Bathurst, N.B. A family emergency required that they be in Montreal quickly. By FRANK CROFT

IF CANADA’S capital isn’t as worldly a city as Paris or Vienna, it isn’t my mother’s fault. Her crusade against Ottawa’s provincialism began with a street restaurant and ended up in court with a public mischief charge. This happened soon after we came to Canada back in 1925, in those happier times when immigrants were known as greenhorns and not refugees. By BEN LAPPIN

A man should laugh at a woman’s hat!

WHEN I was an eleven-year-old girl in London, England, I won a trades scholarship at Northwestern Polytechnic School. I was given a choice of subjects. I chose millinery. I hadn’t the foggiest idea what it meant. I gave as my second choice, cookery. By ANNE CLARK

Often, a concert pianist finds himself assigned to a studio adjacent to one being used by a Dixieland trombonist. Jazzmen at the boardinghouse have been heard to express a sneaking admiration for the classics—and a promising young classical pianist quit her studies to go to New York to learn jazz after being exposed to a few of Melody Mill’s jam sessions.

How to cook without a stove

THE LATEST thing in cooking is to build a fire and hold some meat over it. It’s called a barbecue, an outgrowth of today’s trend to the wide open suburbs that has brought in a new two-fisted outlook on food. From coast to coast, smudged and happy Canadians are tying roasts with baling wire and lowering them onto hot rocks, cooking trout in mud, spit-roasting sucking pigs, baking fish in wet burlap, eating with their fingers and lacing into such lusty portions of meat that the buyer for Canada’s biggest chain of supermarkets recently reported, “I’ve never seen so many thick steaks sold in over thirtyfive years in the business. By THOMAS WALSH

What’s a Communist Signature Worth?

CANADA’S Auditor General, Watson Sellar (as I forgot to mention in an article about him a couple of months ago), spends a few weeks in New York each year auditing the books of the United Nations. This spring he ran across an amusing item. One of the few United Nations agencies allowed to operate inside Red China is an office in Shanghai for the relief of refugees. By BLAIR FRASER

When Paris Hits The Road

CANADA is looking up! Not only do you have your own Festival Theatre at Stratford, even as we do in England’s town of that name, but last winter I had the pleasure of seeing a musical comedy in Toronto based upon Leacock’s immortal sketches of Orillia. By Beverley Baxter
June 251955