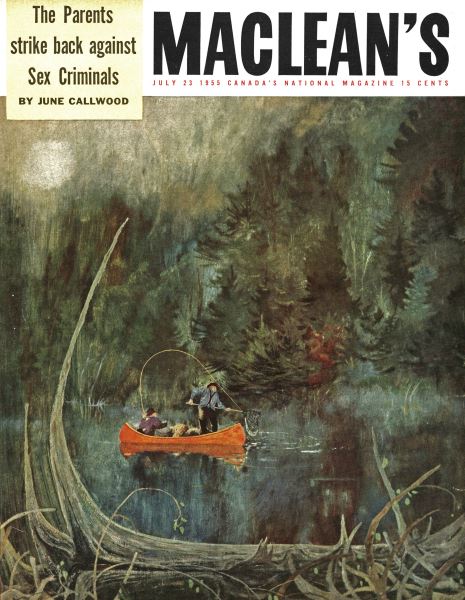 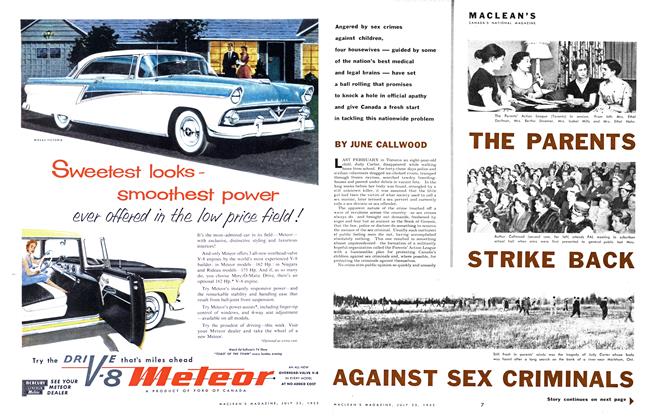 THE PARENTS STRIKE BACK AGAINST SEX CRIMINALS 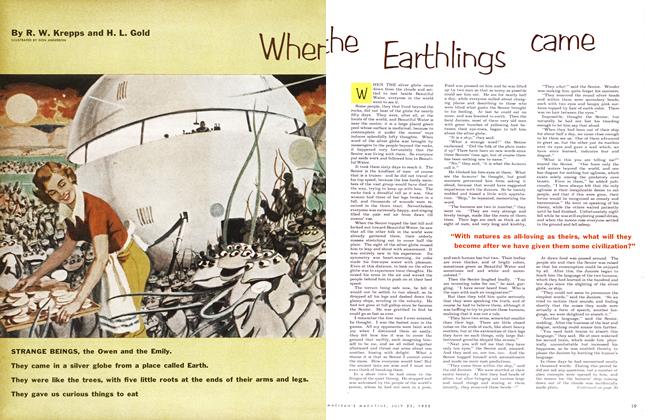 When the Earthlings came 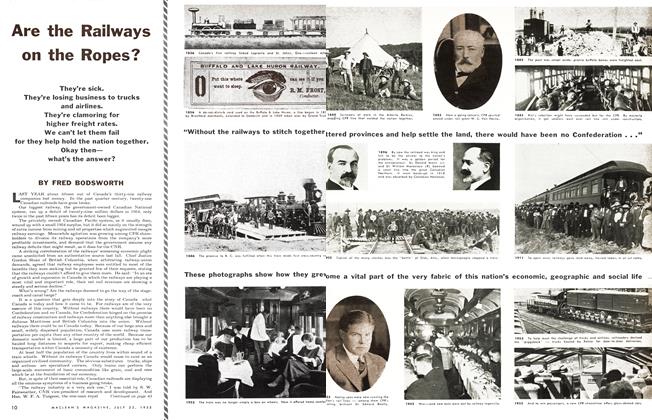 Are the Railways on the Ropes?

THE PARENTS STRIKE BACK AGAINST SEX CRIMINALS

When the Earthlings came

WHEN THE silver globe came down from the clouds and settled to rest beside Beautiful Water, everyone in the world went to see it. Some people, they that lived beyond the rocks, did not hear of the globe for nearly fifty days. They were, after all, at the limits of the world, and Beautiful Water is near the centre; it is a large placid green pool whose surface is medicinal, because to contemplate it under the moons’ rays induces splendidly lofty thoughts.

Are the Railways on the Ropes?

LAST YEAR about fifteen out of Canada’s thirty-one railway companies lost money. In the past quarter century, twenty-one Canadian railroads have gone broke. Our biggest railway, the government-owned Canadian National system, ran up a deficit of twenty-nine million dollars in 1954; only twice in the past fifteen years has its deficit been bigger.

YOUNG GARY, a nine-year-old friend of mine, slammed the front door and tossed his hat at the hall rack, missing it as usual. From the living room he heard his mother calling, "Come here, dear. I have a surprise for you." Gary dashed to the living-room door and stopped short to stare at a brand-new piece of furniture standing over by the window. By LESLIE BELL

ALL THROUGH the summer of 1947 Canada’s first helicopter snarled and flailed about the summits of British Columbia’s Rocky Mountains like a cantankerous dragonfly. Although its makers had not designed it to rise above forty-five hundred feet, it made scores of landings on precarious snowcapped perches at altitudes of over six thousand feet. By McKENZIE PORTER

The Island that knows no summer

WHEN I FIRST espied the wrinkled hide of Baffin Island on a June day in 1954 it seemed almost as if I had reached the ramparts that guard the very rim of the world. For eight hours we had been winging across the piebald surface of Hudson Bay, seeing nothing but the stark whiteness of cloud and ice. By PIERRE BERTON

What’s so Dumb about the Plumber?

THE ANCIENT Romans were considered the smartest people of their age because, among other things, they made pipes to let water run through. I make them every day and connect them to a system that would make the Romans dizzy. And figuring out problems in hydraulics is only part of it. By ALLAN C. MARKS

OPPOSITION LEADER George Drew was not the only man upset by the recent changes in top personnel at National Defense which so enlivened the closing weeks of parliament. Some regular officers, too, regarded the shake-up not as the routine operation which the department insists that it is, but as another symptom of a general trend against the Canadian Army. By BLAIR FRASER

THE WORSHIP of youth has never been a British characteristic. Over here they like ancient monuments, old inns, medieval churches and crumbling open fireplaces. Even in the theatre the pretty young starlets gaze with envy at actresses in their seventies like Sybil Thorndike and Edith Evans who are a sellout as soon as it is known they will appear. By Beverley Baxter

Blair Fraser has shown courage in writing on a subject so touchy as religion (The Grave Inequalities of Our Separate Schools, May 28) . . . but it all boils down to one thing: do we want educated Canadians or do we want devoted church followers?
July 91955