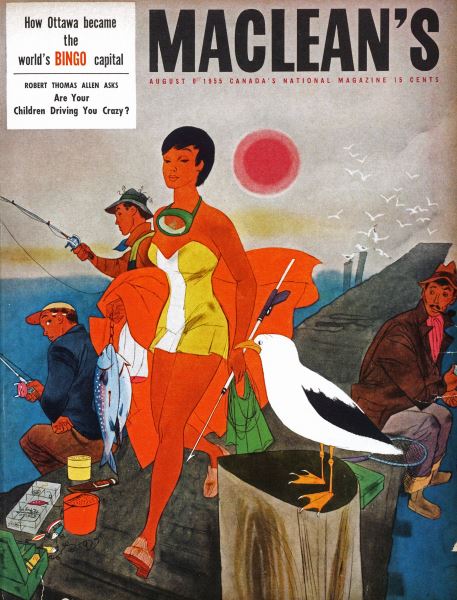 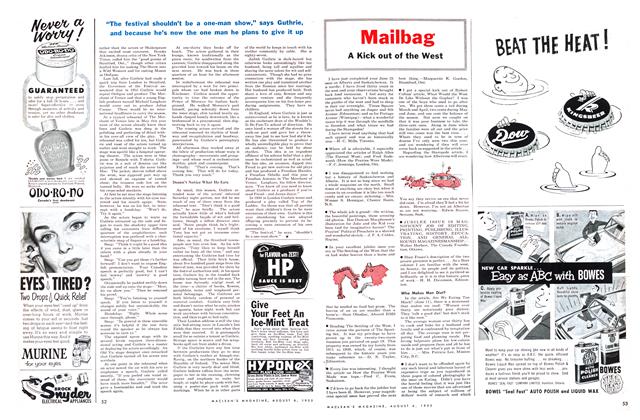 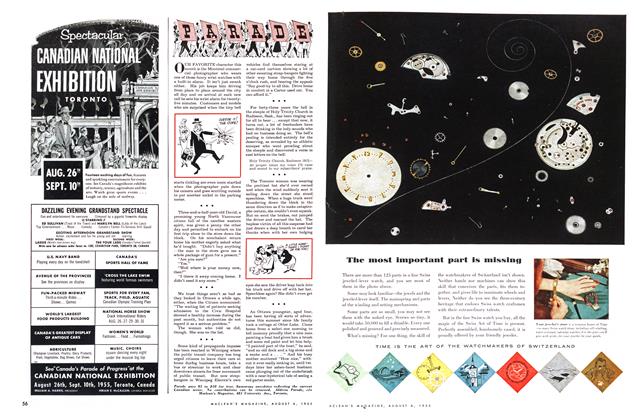 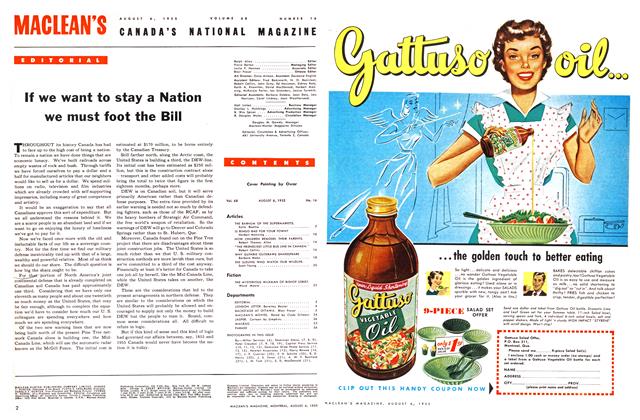 A Kick out of the West

OUR FAVORITE character this month is the Montreal commercial photographer who wears one of those fancy wrist watches with a built-in alarm. It isn’t just swank either. His job keeps him driving from place to place around the city all day and on arrival at each new call he sets his wrist alarm for twentyfive minutes.

THROUGHOUT its history Canada has had to face up to the high cost of being a nation. To remain a nation we have done things that are economic lunacy. We’ve built railroads across empty wastes of rock and bush. Through tariffs we have forced ourselves to pay a dollar and a half for manufactured articles that our neighbors would like to sell us for a dollar.

MISTER ROBERTS: Hollywood has done a dandy job on the famed Thomas Heggen comedy-drama about some bored American sailors in the backwaters of the Pacific during World War II. The locker-room lustiness of the novel and the stage production has been toned down a bit, as you might expect, and one or two comic highlights are weakened by overemphasis, but on the whole this is a vastly enjoyable show. By CLYDE GILMOUR3 min

How Children Remodel Their Parents

He’s flamboyant and headstrong, makes acrobats of his actors, abhors the ordinary, and some of his errors (say his critics) have been lulus. But Tyrone Guthrie is the real star of Stratford’s Shakespearean Festival. That’s why he’s decided it's time to leave By BARBARA MOON16 min

THE BARNUM OF THE SUPERMARKETS

Can Bill Horsey rule the grocery world? So far, in the fight for Canada’s billion-and-a-half-dollar grocery bill, his Dominion Stores are second and growing fast. And his strange circus ways are so successful that even his biggest rivals are stealing his stuff By EARLE BEATTIE23 min

That’s what they call it in Medicine Hat where the drivers will sometimes mind the children, drop you at your door, mail your letters or even loan you money By ROBERT COLLINS14 min

A Case of Fisherman’s Luck?

OFFHAND it’s hard to think of two groups more remote from each other than the auto workews of Ontario and the cod fishermen of Newfoundland. But it may turn out as a curiosity of Canadian labor history that the auto workers play an important (though unintentional) part in bringing unemployment insurance to the fishermen, all of whom are now unprotected. By BLAIR FRASER10 min

The mysterious milkman of Bishop street

That bitter Montreal winter we were glad to find a milkman who left the bottles inside. But, my goodness, when he brought them through locked doors we felt it was time to leave By WARD MOORE22 min

Can Eden Lick the Strikes?

AFTER ANY general election the House of Commons takes on a subtle alteration. New boys are spread around the benches, puzzled but proud—and just a little frightened. The old boys, like old lags, know everything and everybody. They do not have to be told the rules or look apprehensively at the whips. By Beverley Baxter8 min
July 231955