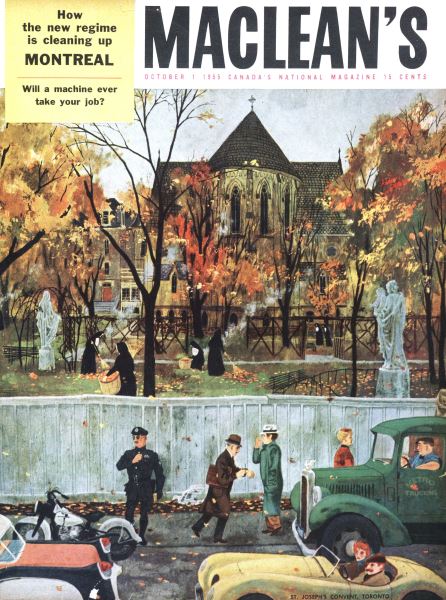 The Miracle Factory that began in a Stable 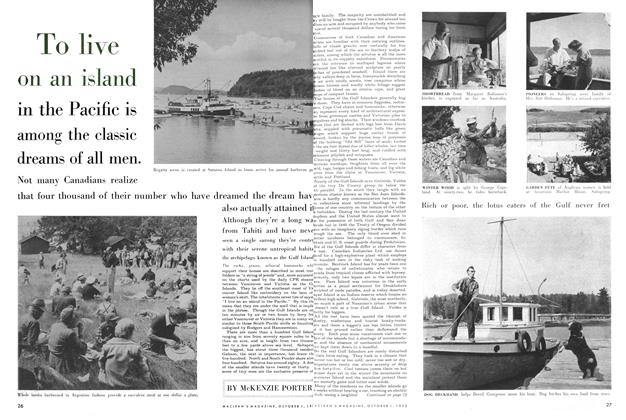 To live on an island 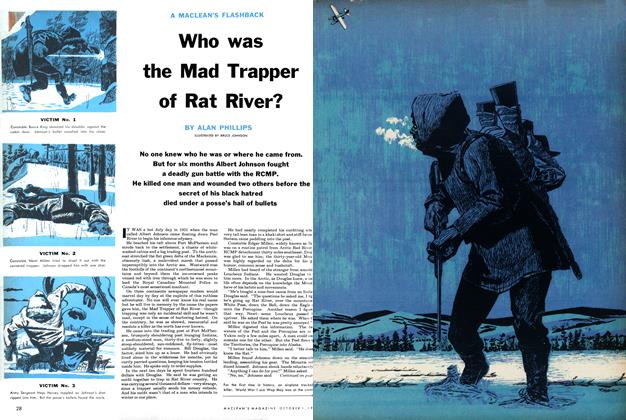 Who was the Mad Trapper of Rat River?

The Miracle Factory that began in a Stable

DURING the height of the Salk polio vaccine panic in the United States last spring, when the vaccination of school children was halted because insufficiently tested vaccine had infected dozens of children with paralytic polio, Oregon’s Senator Richard Neuberger snapped:

To live on an island

Not many Canadians realize that four thousand of their number who have dreamed the dream hay also actually attained it Although they’re a long wai from Tahiti and have neve seen a single sarong they’re conte with their serene untropical habita the archipelago known as the Gulf Island The rocky, grassy, arborial hummocks whii support their homes are described in most tray folders as “a string of jewels” and, more accurate! on the charts used by the daily CPR steame between Vancouver and Victoria as the Gu Islands. They lie off the southeast coast of Va couver Island like embroidery on the hem of woman’s skirt.

Who was the Mad Trapper of Rat River?

IT WAS a hot July day in 1931 when the man called Albert Johnson came floating down Peel River to begin his infamous odyssey. He beached his raft above Fort McPherson and strode back to the settlement, a cluster of whitewashed cabins and a log trading post.

Will a machine ever take your job?

EVEN THE most casual of newspaper readers has recently become aware that something new —and big — is going on in North American industry. It’s already being described as the Second Industrial Revolution. The difference is that the first one used machines to do things—to cut, to spin, to weave, to shape, to lift — but always for a human operator. By NORMAN DePOE

What Virtue has done to Montreal

A FEW months ago, at the opening of Montreal’s much-advertised tourist season, a motorist from New York City stopped at Plattsburg, N.Y., about twenty miles below the Canadian border, registered in one of the town’s hotels, and stopped to talk with the manager. By HERBERT MANNING

LATE LAST century some thousands of Chinese from Canton, having completed the epic labor for which they had been lured to Canada— helping pick-and-shovel the transcontinental rail beds to the Pacific tried to earn a living with their only really valuable asset: By DOUGLAS DACRE

CHARLAR SAT cold on the curbstone at dusk in this city only thirty miles from his goal. He was ragged now, and mumbling, a ^ thin man whose black eyes glittered with the obsession to reach his goal. After all this distance and time he was but thirty miles from John Paulo, his goal. By JOHN I. KEASLER

The unlikeliest couple in show business

SOMETIMES it’s hard for George Murray, a rough-hewn hulk of an Irish tenor, to realize that the pretty little girl sitting across the room from him is his wife. He’ll he slouched in a big chair, reading the front page of a newspaper and sipping a drink, and suddenly he’ll be roused by a tinkling laugh. By TRENT ERAYNE

Will the Amery dream come true

Will Ottawa Open The Cashbox?

IF PREMIERS from the “havenot” provinces hope to get more money out of Ottawa as a result of the conference in October, they are likely to be disappointed. Ottawa’s objective has changed diametrically since the conferences of 1945 and 1950, but for that very reason, Ottawa’s offer of “tax rentals” to provinces will remain about the same as before. By BLAIR FRASER
September 171955