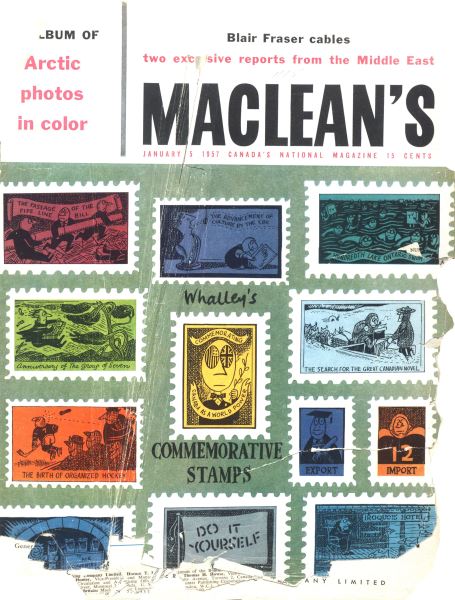 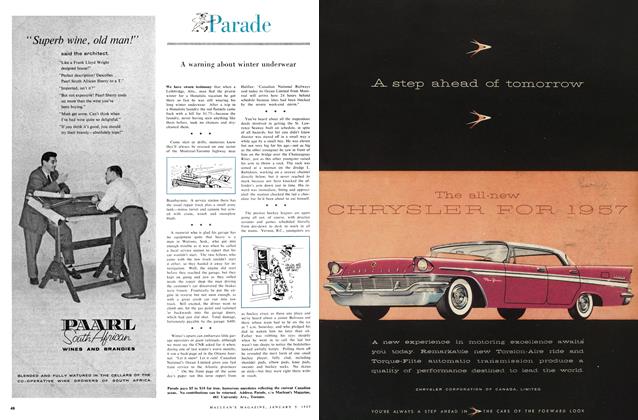 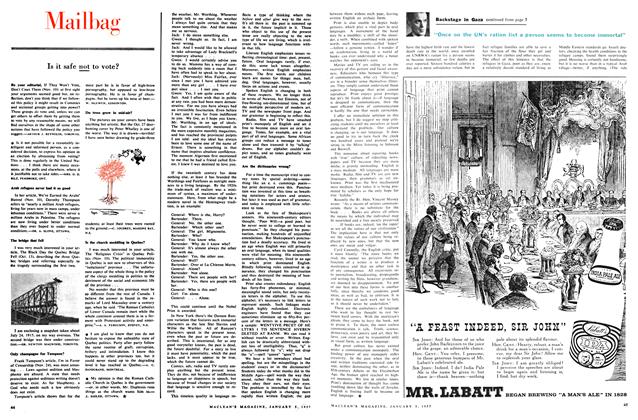 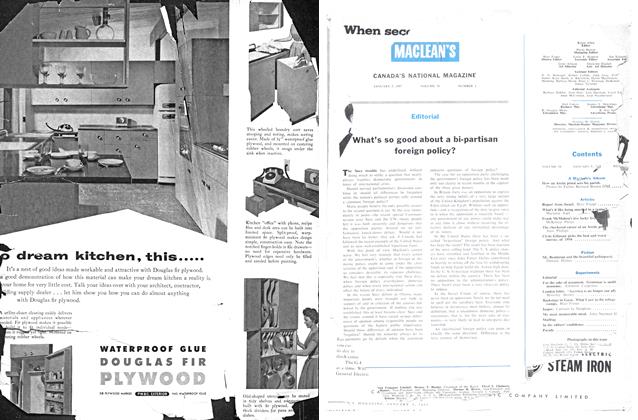 We have sworn testimony that when a Lethbridge, Alta., man fled the prairie winter for a Honolulu vacation he got there so fast he was still wearing his long winter underwear. After a trip to a Honolulu laundry the red flannels came back with a bill for $1.75—because the laundry, never having seen anything like them before, took no chances and drycleaned them.

Re your editorial, If They Won’t Vote, Don’t Coax Them (Nov. 10): at first sight your arguments seemed good but. on reflection, don’t you think that if we followed this policy it might result in Commies and sectional groups getting into power? These groups do vote and, unless we can get others to offset them by getting them to vote by any reasonable means, we will find ourselves in the shape of some other nations that have followed the policy you suggest.

The Suez trouble has underlined, without doing much to settle, a question that nearly always troubles democratic governments in times of international crisis. Should normal parliamentary discussion continue or should all differences be forgotten while the nation’s political parties rally around a common foreign policy?

Beginning an extended tour of the crisis centres of the Middle East and Europe, Canada’s best-known political reporter records his on-the-spot impressions from the seething caldron of Israel

There were four of us who messed together at Luckenwald prison camp, and we were hungrier than we had ever been in that spring of 1945, because Red Cross parcels couldn’t get through on the wellbombed railways. We talked and dreamed of food, and that first enormous meal in the freedom that was coming. By John Norman Harris2 min

4647
IN THE editors’ confidence

One of the last of Oscar Cahen’s illustrations for Maclean’s appears on pages 10 and 11 of this issue. Like the artist himself, it has gayness and spontaneity, as well as a sureness of touch that stamps it as the work of an extraordinary illustrator. By Oscar Cahen1 min

If next week is like this week, then one of our newspapers will quote the warning of some eminent person that the English language is in danger of being destroyed. Perhaps a professor will complain that university freshmen can't spell. The head of a large corporation will cry that none of his stenographers knows where to put commas.

How an Arctic priest sees his parish

The pictures on these and the following pages are equal in quality, technique and artistry to anything Maclean's has published by professional photographers, but they were made by a rank amateur. The cameraman is Father Bernard Brown, the Oblate missionary described by Alan Phillips on the previous page.

JERUSALEM Gaza for three thousand years has been a symbol both of ignominy and of revenge. Here the captive Samson ("eyeless in Gaza, at the mill with slaves”) regained enough of his strength to pull down the roof upon himself and his enemies. By BLAIR FRASER6 min

“America is no longer our ally” By BEVERLEY BAXTER6 min

Mr. Benturian and the beautiful palimpsest

Some paintings made Mademoiselle nervous; others caused unpleasantness at the customs house. So it behooved a connoisseur to exercise caution and even guile when choosing a work of art By Donald Heiney20 min
December 221956