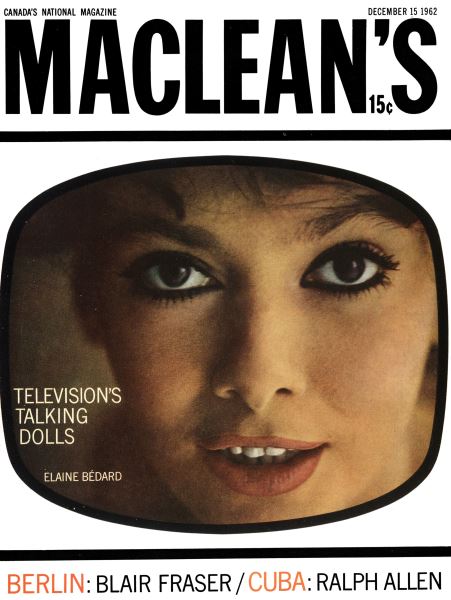 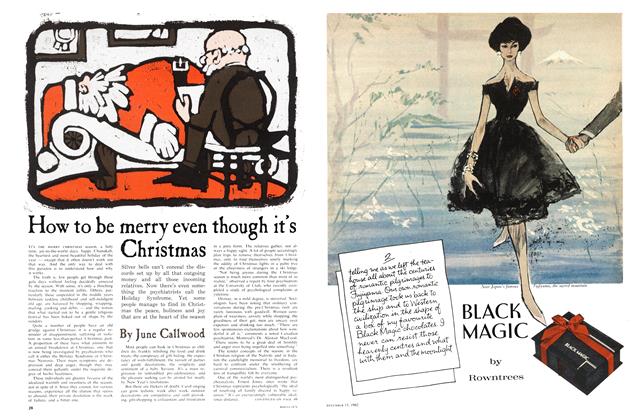 How to be merry even though it's Christmas 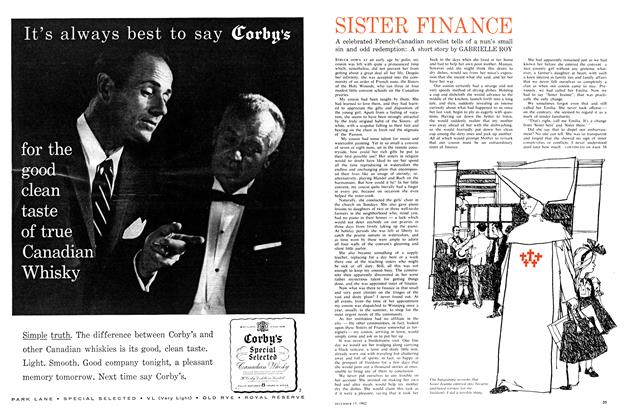 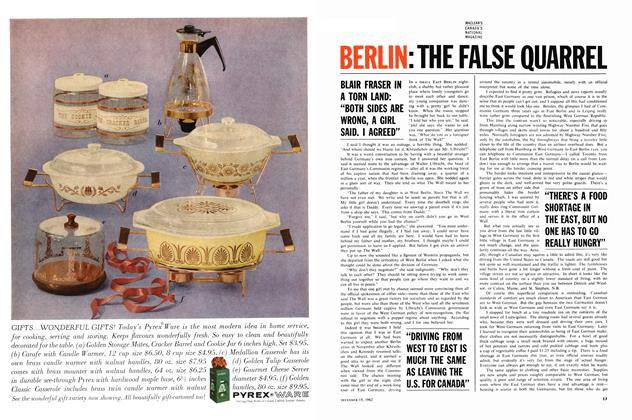 How to be merry even though it's Christmas

IT's THE MERRY CHRISTMAS season, a holy time, joy-to-the-world days, happy Chanukah, the heartiest and most beautiful holiday of the year — except that it often doesn't work out that way. And the only way to deal with this paradox is to understand how and why it works. By June Callwood

STRUCK DOWN AT an early age by polio, my cousin was left with quite a pronounced limp which, nonetheless, did not prevent her from getting about a great deal all her life. Despite her infirmity, she was accepted into the community of an order of French nuns, the Sisters of the Holy Wounds, who ran three or four modest little convent schools on the Canadian prairies. By GABRIELLE ROY

IN A SMALL EAST BERLIN nightclub, a shabby but rather pleasant place where lonely youngsters go to meet each other and dance, my young companion was dancing with a pretty girl he didn't know. When the music stopped he brought her back to our table.

PORTRAIT OF ONE OF CANADA’S AMERICAN OWNERS

John C. Doyle of New York owns an iron-mining enterprise that will take two billion dollars out of Canadian soil. This is the tangled story of how he got it, how he keeps it, and how he spends the profits

TREATING THE SICK is a science, hut discovering what sickness to treat is an art. This art is called diagnosis, and lately I see more and more signs that despite the miracles of modern medical science, or maybe because of them, diagnosis is in some danger of becoming a lost art. By Dr. Alton Goldbloom

HOW I NEARLY LEARNED TO SKI IN A WEEK

ON THE FIRST DAY I was ever on skis, I was herded along with a couple of dozen other people to the bottom of a steep hill at the foot of Mont Tremblant, in Quebec, and told to start climbing. I saw the others side-stepping up, and did the same. It was easy. By PETER GZOWSKI

WHATEVER MYTHS IT CREATED or dispelled, the last week of October — the week of the Cuban blockade, of the withdrawn missiles, the withheld invasion, the impressed button, the waiting mushroom cloud—brought home one forgotten truth. The real command decisions of this year do not rest alone with the two remote and lonely leaders in the White House and the Kremlin.

Of the many thousands (probably) of good-looking women in Canada who are also pleasant to listen to, about a dozen earn more or less good livings as the talking dolls of television. They are the girls who smile and chatter from the picture tube, giving forth a seemingly endless supply of bubbling good humor and unprofound but palatable things to say, forecasting weather, introducing entertainment, interviewing celebrities and generally just being their entrancing selves.

THIS MAN CAN COOK

MEN WHO CAN'T COOK have always come back at women who can by claiming that even if most cooks are female, the best cooks are male. For these men — and for women who are interested in what their men would really like to eat — an Irish-born bachelor named Basil FitzGibbon will come as a fresh and welcome addition to the culinary evidence. By KEN JOHNSTONE

It has been a pleasure subscribing to a Canadian publication such as yours, but no more. In the editorial of your Nov. 3 issue you openly condone and further the cause of legal abortion. You do so in a shamefully illogical manner. You use the “smear” tactic more unabashedly than communists do. You imply that the stand of religion on abortion is completely out of date (like God may be or the Ten Commandments to you) and a shameful impediment to modern progress.
December 11962