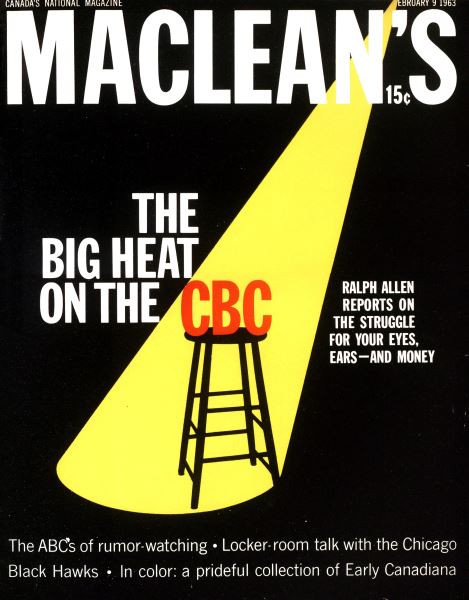 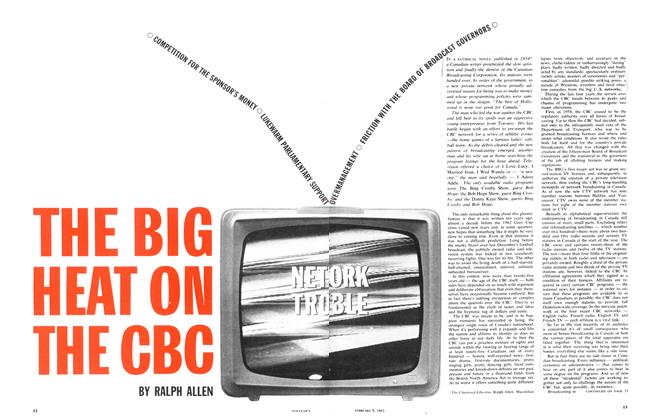 THE BIG HEAT ON THE CBC 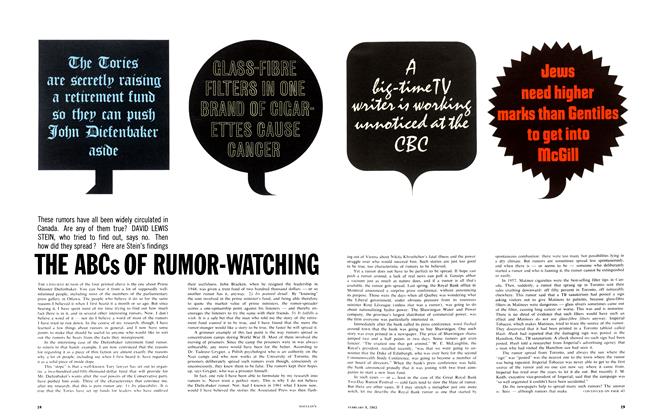 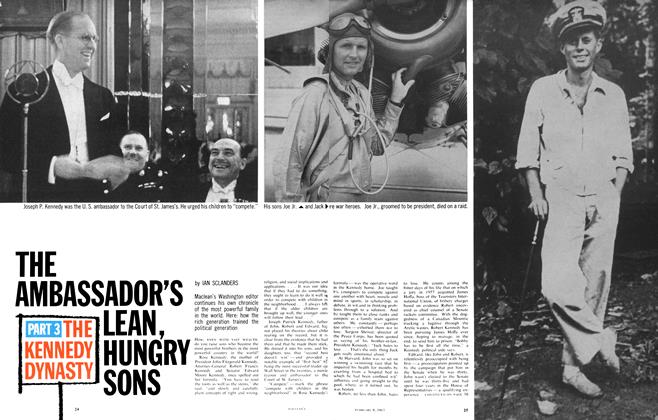 THE BIG HEAT ON THE CBC

The only remarkable thing about this gloomy fantasy is that it was written ten years ago. almost a decade before the 1962 Grey Cup crisis raised new fears and. in some quarters, new hopes that something like it might be very close to coming true.

These rumors have all been widely circulated in Canada. Are any of them true? DAVID LEWIS STEIN, who tried to find out, says no. Then how did they spread? Here are Stein’s findings

The hairy Hawks of Chicago

JIM BROSNAN is a big-league baseball pitcher and a big-league funny writer. THE CHICAGO BLACK HAWKS are the hairiest (meaning, roughly, roughest) team in the hairiest pro sport of all. This is Brosnan’s account of what happened when he and the Hawks got together

The purple prose and purple life of Arthur Stringer

The Canadian who married the original Gibson Girl /also wrote Byronic poetry and The Perils of Pauline / spent a fortune pursuing happiness — and other women / died unrepentant, wept by two generations of international beauties

One Canadian student in three doesn’t get beyond grade eight. Seven out of ten don’t finish high school. Most of them could do much better. Here’s how we’re beginning to keep some of them in school—and why we must learn how to salvage the rest. By JANICE TYRWHITT11 min

Plain pornography: the bull market you can’t explore on the financial pages By IAN SCLANDERS6 min

HUGH GARNER'S SPECIAL VIRTUE as a short story writer is that he lets us draw our own conclusions about his characters. The clean, sharp stories Garner has been publishing for the last dozen years have been good naturalistic fiction precisely because they have presented his characters — usually outcasts, like migrant workers or poor Indians—in direct, simple terms, without windy comment. By ROBERT FULFORD6 min

0_21
Why Winnipeg is the best place for U. S. students to study communism

Charles Dubin: he makes Hal Banks wish he was back on the waterfront
January 261963