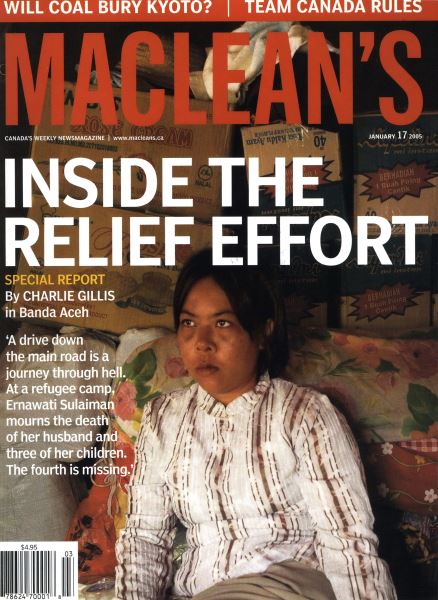 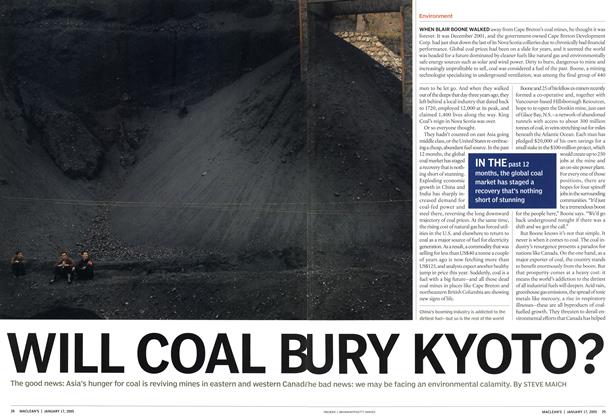 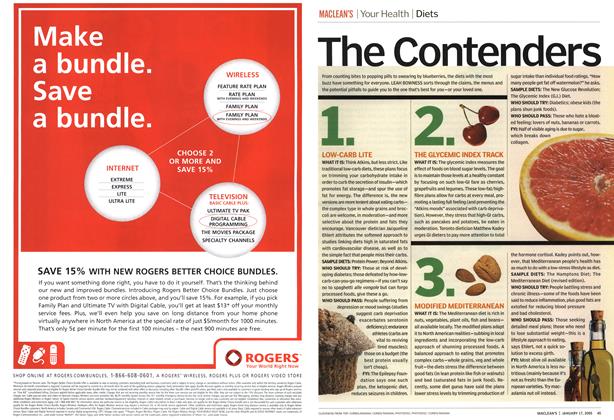 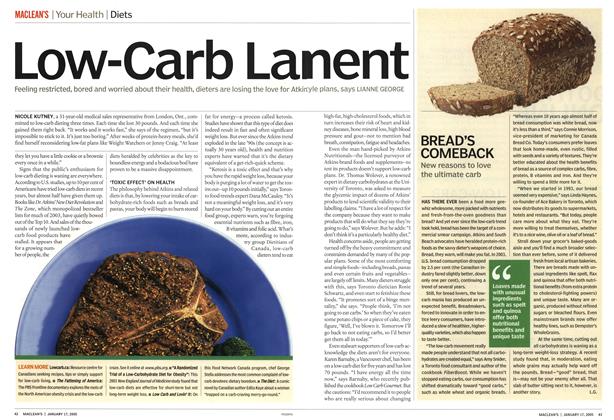 WHEN BLAIR BOONE WALKED away from Cape Breton’s coal mines, he thought it was forever. It was December 2001, and the government-owned Cape Breton Development Corp. had just shut down the last of its Nova Scotia collieries due to chronically bad financial performance.

WHAT IT IS: Think Atkins, but less strict. Like traditional low-carb diets, these plans focus on trimming your carbohydrate intake in order to curb the secretion of insulin-which promotes fat storage-and spur the use of fat for energy. The difference is, the new versions are more lenient about eating carbs— the complex type in whole grains and broccoli are welcome, in moderation-and more selective about the protein and fats they encourage.

NICOLE KUTNEY, a 31-year-old medical sales representative from London, Ont., committed to low-carb dieting three times. Each time she lost 30 pounds. And each time she gained them right back. “It works and it works fast,” she says of the regimen, “but it’s impossible to stick to it.

Never have I been so proud of Maclean’s as when it named Chantal Petitclerc its “Canadian of the Year” (Cover, Dec. 27). Yes, Perdita Felicien ranks right up there in track and field, but in view of the daunting challenges that disabled persons face 24/7, the winner is obvious.

AS THE GRISLY DETAILS emerged in the wake of Southeast Asia’s earthquake and tsunami, the world pulled together as never before. Within days, Western governments rounded up the largest foreign aid package ever assembled—a US$5-billion effort aimed at rebuilding the parts of coastal Indonesia, Sri Lanka, Thailand and India hardest hit by the rogue waves. By STEVE MAICH

THE NEED TO GIVE

SHEILA WILSON was determined to donate money to Médecins Sans Frontières (Doctors Without Borders), but couldn’t get through by phone. “I persisted,” she recalls and, finally, was able to leave a message. “If you haven’t got enough people to answer those phones,” the retired school trustee said, “I’ll come and do it.”

INSIDE THE RELIEF EFFORT

IN THE CRUSHING heat of a Sumatran afternoon, amid the rising odour of rotting flesh, Nurmiah Ali is trudging across a wasteland of broken concrete, staring at the ground as though dreading what she’s come here to find. “My two granddaughters,” says the 54-year-old through tears. By CHARLIE GILLIS

WHEN THE CANADIAN PLAYERS skated onto the ice for the third period of the final at the world junior championships, they weren’t really playing for gold medals anymore— with a 6-1 lead over a downcast Russian team, the gold was a done deal. No, these Canadian teenagers in Grand Forks, N.D., were playing for their place in history. By GARE JOYCE

KNIT TWO, PURL TWO, clickety-clack. There’s something mesmerizing about knitting. But the guy beside me on the subway conjuring up a sock from a strand of teal blue yarn isn’t likely to drift into a trance. Three years after learning to knit, Karol Orzechowski still has to focus on finagling the wool around the needles. By SUE FERGUSON

PATRICK BOYER is a veteran of what passes for ballot-box combat in Canada. He was elected as the Conservative MP for a Toronto riding in Brian Mulroney’s 1984 landslide, then defeated when the Tories were all but wiped out under Kim Campbell in 1993. By JOHN GEDDES
January 102005