The new science of marriage 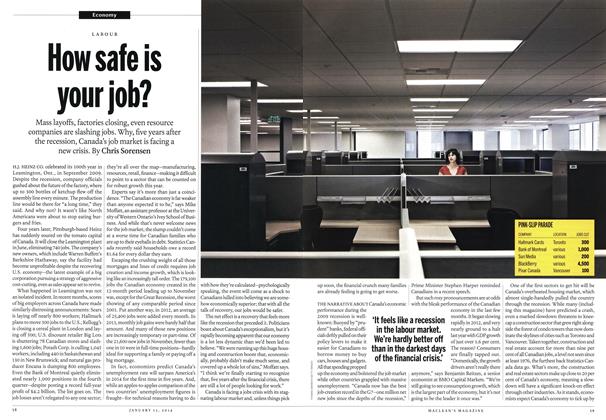 How safe is your job? 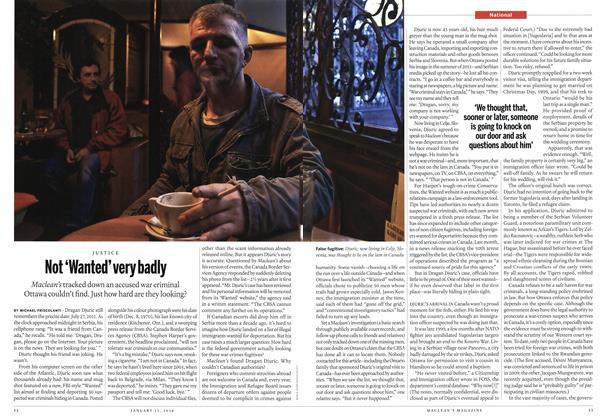 The new science of marriage

Dave and Joyce Mayne, who met on a blind date, have been married 33 years. They live in Elmvale, Ont., near Barrie, and have two adult children. “We’re bikers,” says Dave, 60. “We probably put 20,000 clicks on the Harley every summer. Joyce loves to say, ‘What other holiday is there where you’re spending two weeks with your legs around your husband?’ ” In 2007, Dave was diagnosed with prostate cancer.

How safe is your job?

H.J. HEINZ CO. celebrated its 100th year in Leamington, Ont., in September 2009. Despite the recession, company officials gushed about the future of the factory, where up to 300 bottles of ketchup flew off the assembly line every minute. The production line would be there for “a long time,” they said.

Dragan Djuric still remembers the precise date: July 27,2011. As the clock approached midnight in Serbia, his cellphone rang. “It was a friend from Canada,” he recalls. “He told me: ‘Dragan, Dragan, please go on the Internet. Your picture is on the news.

It was Chris Downey’s first tour of Afghanistan. He was one month in when, while on foot, the 28-year-old was blasted by an IED. His friend was killed, and he spent three months in hospital and more than two more years recovering. When the email came from Soldier On, a charity providing career counselling for wounded veterans, about a trek to the South Pole, he decided it would be a fitting tribute to his fallen comrade. By AARON HUTCHINS

Those of us who are concerned about increasing partisanship (“The partisan problem is spreading,” From the Editors, Dec. 23) need to not vote for candidates who engage in it, and tell them why they lost their vote. We have to stop rewarding these people for lowering the tone of the discussion.

It was a surreal moment in Kabul on Nov. 24. The streets in this teeming city of 3.5 million were unusually quiet. For days, government offices and businesses had been shut down while Afghanistan’s tribal elders, politicians, religious leaders and activists gathered in a traditional Loya Jirga to debate the future of American troops in their country. By ADNAN R. KHAN

A long and painful balancing act

The spectacle Jim Flaherty offered when he played host to provincial finance ministers at Meech Lake in mid-December was one of those moments when partisan politics takes a back seat to human drama. Stonewalling several provinces on Canada Pension Plan reform, the federal finance minister couldn’t hide the effects of a rare skin disease that has sapped his strength for more than a year. By PAUL WELLS

After the introduction and the applause, in the silent few seconds before the music begins, Patrick Chan knows where he will be going this February: his happy place, a clean sheet some 9,000 km away from the Iceberg Skating Palace in Sochi, where he can jump, step and spin, and where only a few friends—rather than the entire planet—are watching. By JONATHON GATEHOUSE

Back by popular revolt

It never happened before, and it may never happen again: The creator of a major network TV show was invited back a year after being fired from his own show. That’s the story behind the fifth season of Community, starting Jan. 2 on Citytv. The studio dismissed creator Dan Harmon, only to reinstate him after lobbying from fans and the show’s star, Joel McHale. By JAIME J. WEINMAN

An ancient war is new again

Of the various slurs and insults that opposing sides in Syria’s civil war fling at each other, there are some so archaic, they seem not to belong in a modern conflict. Among them is the Arabic and Persian term Majous, used by Sunni Muslim rebels against supporters of President Bashar al-Assad. By MICHAEL PETROU
December 302013