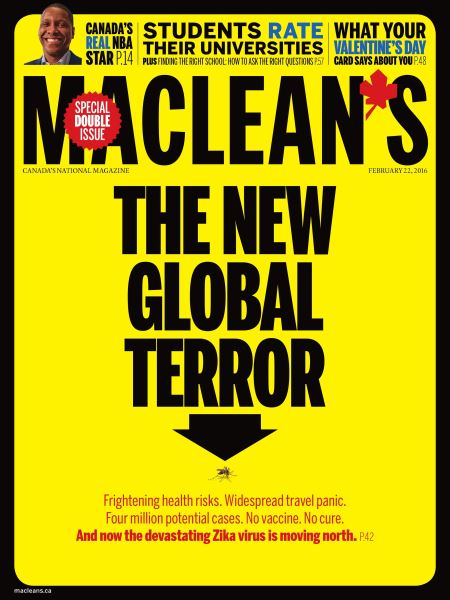 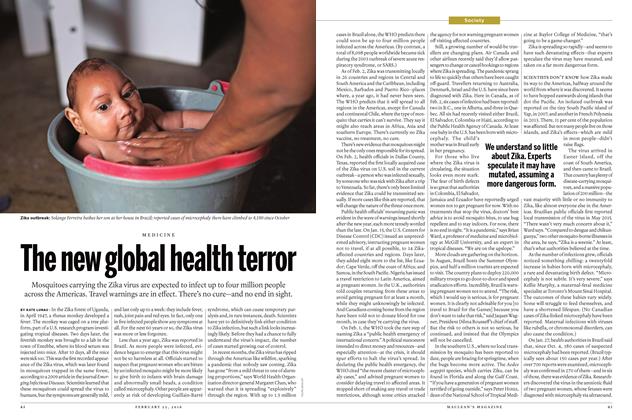 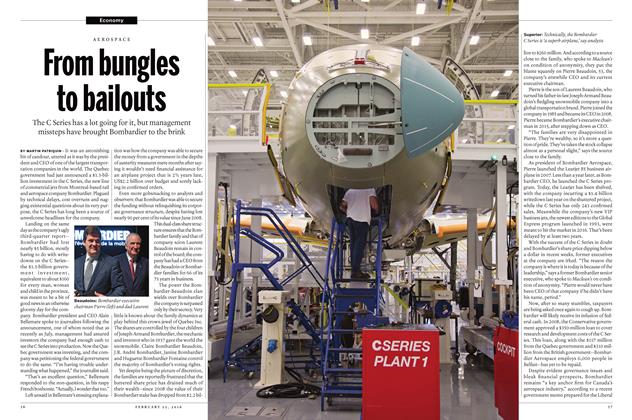 From bungles to bailouts 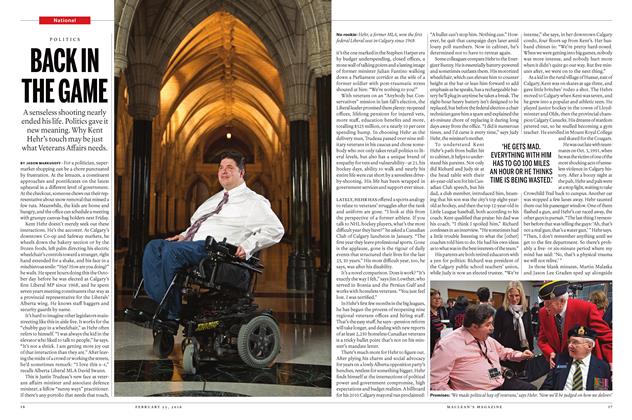 BACK IN THE GAME

In the Zika forest of Uganda, in April 1947, a rhesus monkey developed a fever. The monkey was caged on a tree platform, part of a U.S. research program investigating tropical diseases. Two days later, the feverish monkey was brought to a lab in the town of Entebbe, where its blood serum was injected into mice.

From bungles to bailouts

It was an astonishing bit of candour, uttered as it was by the president and CEO of one of the largest transportation companies in the world. The Quebec government had just announced a $1.3-billion investment in the C Series, the new line of commercial jets from Montreal-based rail and aerospace company Bombardier.

BACK IN THE GAME

For a politician, supermarket shopping can be a chore punctuated by frustration. At the lettuces, a constituent approaches and pontificates on the latest upheaval in a different level of government. At the checkout, someone chews out their representative about snow removal that missed a few ruts.

How to pick a winner

Hello from the outside, sang the voters of Adel. “The people in Washington know nothing about our lives,” said the clerk at the public library. “They think we’re all still standing in front of our houses, holding a pitchfork,” said the Lutheran pastor. By ALLEN ABEL

More than 20 years ago, Denby, a writer for The New Yorker, returned to Columbia University decades after he had graduated, to experience life again as a freshman English student re-reading a selection of Western classics. The result was his 1996 bestseller Great Books. By ALLAN LEVINE

Above the door to the Prime Minister’s third-floor office on Parliament Hill, a phoenix rises triumphantly from flames. It’s a striking piece of craftsmanship, but easy enough to overlook in the Centre Block of the Parliament Buildings, where the grey limestone interior is elaborately carved at every turn with figures from heraldry, nature and history. By JOHN GEDDES

DAY ONE OF the Jian Ghomeshi criminal trial had all the hallmarks of a much-anticipated "theatrical" experience. Media lined up at the door of Toronto's Old City Hall as if clamouring for rush seats. The first 30 allowed in the courtroom—a wonky hybrid of magisterial wood-panelled place of justice and ’60s office building with fluorescents overhead— were given tickets for re-entry, a first, according to courthouse staff. By ANNE KINGSTON

The most damning indictment of country music in recent memory came not from a latte-sipping rock critic, or a twang-hating guardian of taste, but from one of Music City’s own. Greg Todd was an aspiring Nashville songwriter two years ago when he noticed distinct similarities between the songs getting airplay on mainstream country radio—distinct, even in a genre known for artistic conformity. By CHARLIE GILLIS

The execution of Sheik Nimr al-Nimr and 46 other people in Saudi Arabia’s capital of Riyadh last month was a curious bit of cruelty, even by Saudi standards. Nimr, a political activist and leading figure in the Shia reformist community, opposed the Iranian regime and considered the Assads in Syria “oppressors,” sentiments shared by the Saudi government. By ADNAN R. KHAN

Masai Ujiri is used to trail blazing. The president and general manager of the Toronto Raptors became the first African-born GM in any North American league when he took over the Denver Nuggets in 2010. In 2013, he became the only non-American to be named NBA Executive of the Year. By JONATHON GATEHOUSE
February 82016